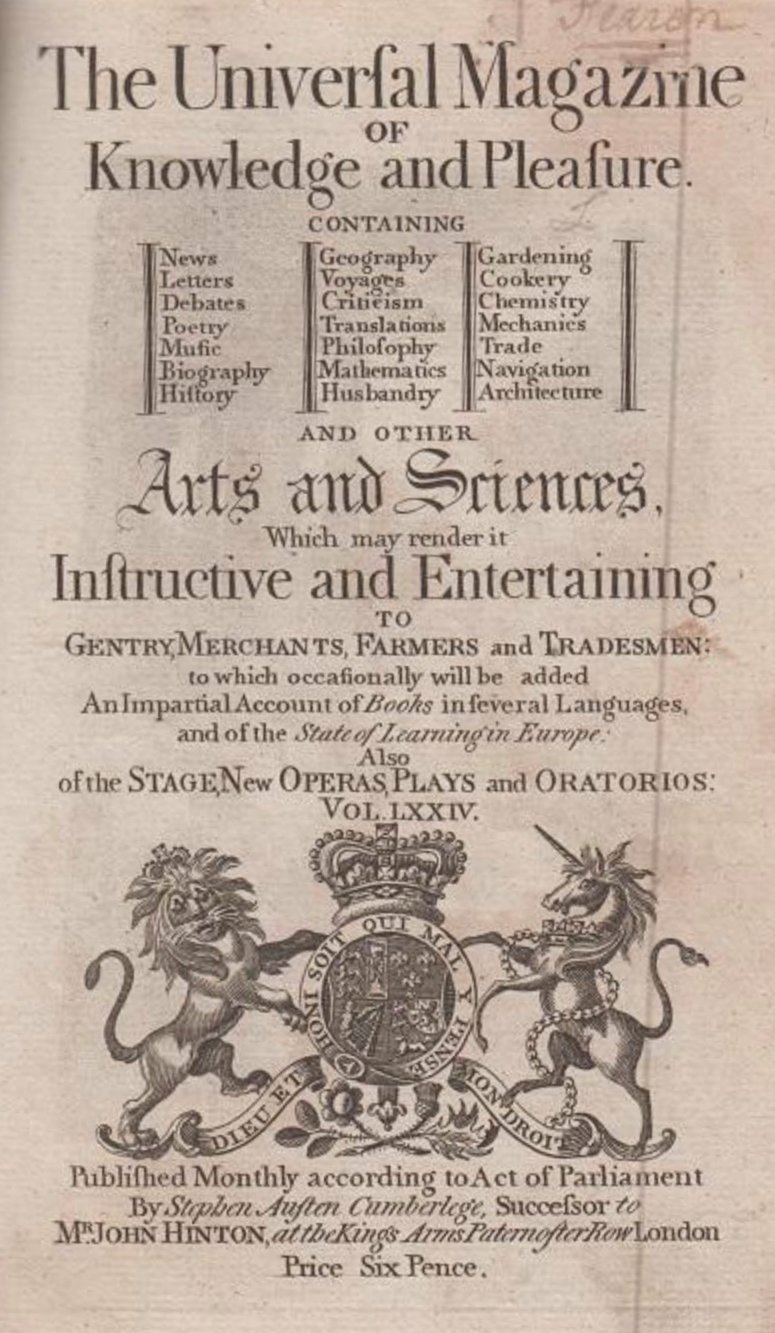 1789 Letter to George Washington From Alexandria Mayor and His Reply

The year was 1789, and it was an eventful year. The first presidential election had just been held, and after a short retirement at Mount Vernon, George Washington was elected president. The United States capital was New York City, the Electoral College voted unanimously for Washington, and the House of Representatives met for the first time, and they declared the Constitution to be in effect. All of that happened in the first three months of the year!

The inauguration was set to occur on April 30, and George Washington made plans to leave Alexandria and Mount Vernon for at least the next four years, places to which he was deeply attached. Before he left, the Mayor of Alexandria, Dennis Ramsay, wrote a letter to George Washington, and Washington would quickly reply. Those letters were still newsworthy a year later and were published in the April 1790 edition of The Universal Magazine of Knowledge and Pleasure in London.

The Universal Magazine was an interesting publication. Wikipedia has this to say about it:

The Universal Magazine of Knowledge and Pleasure was a periodical published in London in the period 1747–1814 by John Hinton and W. Bent. It advertised itself as dealing with "Letters, Debates, Essays, Tales, Poetry, History, Biography, Antiquities, Voyages, Travels, Astronomy, Geography, Mathematics, Mechanics, Architecture, Philosophy, Medicine, Chemistry, Husbandry, Gardening and other Arts and Sciences; which may render it Instructive and Entertaining. To which will be added An Impartial Account of Books in several Languages, And of the state of Learning in Europe; also Of the New Theatrical Entertainments." The magazine was published under Royal Licence according to an Act of Parliament obtained by Hinton.

The April 16, 1789 letter from Mayor Ramsay reads as follows:

The Address of the Inhabitants of Alexandria, in Virginia, to General, Washington, on leaving his House to accept of a Presidency see of the United States of America.

To GEORGE WASHINGTON, Esq., President of the United States, &c.

Again your country commands your care. Obedient to its wishes, unmindful of your ease, we see you again relinquishing the bliss of retirement, and this too at a period of life when nature itself seems to authorize a preference of repose!

Not to extol your glory as a soldier; not to pour forth our gratitude for past services; not to acknowledge the justice of the unexampled honor which has been conferred upon you by the spontaneous and unanimous suffrage of three millions of freemen in your election to the supreme magistracy ; nor to admire the patriotism which directs your conduct — do your neighbors and friends now address you — Themes, less splendid but more endearing impress our minds — The first and best of citizens must leave us—our aged must lose their ornament ! our youth their model ! our agriculture its improver, our commerce its friend ! our infant academy its protector ! our poor their 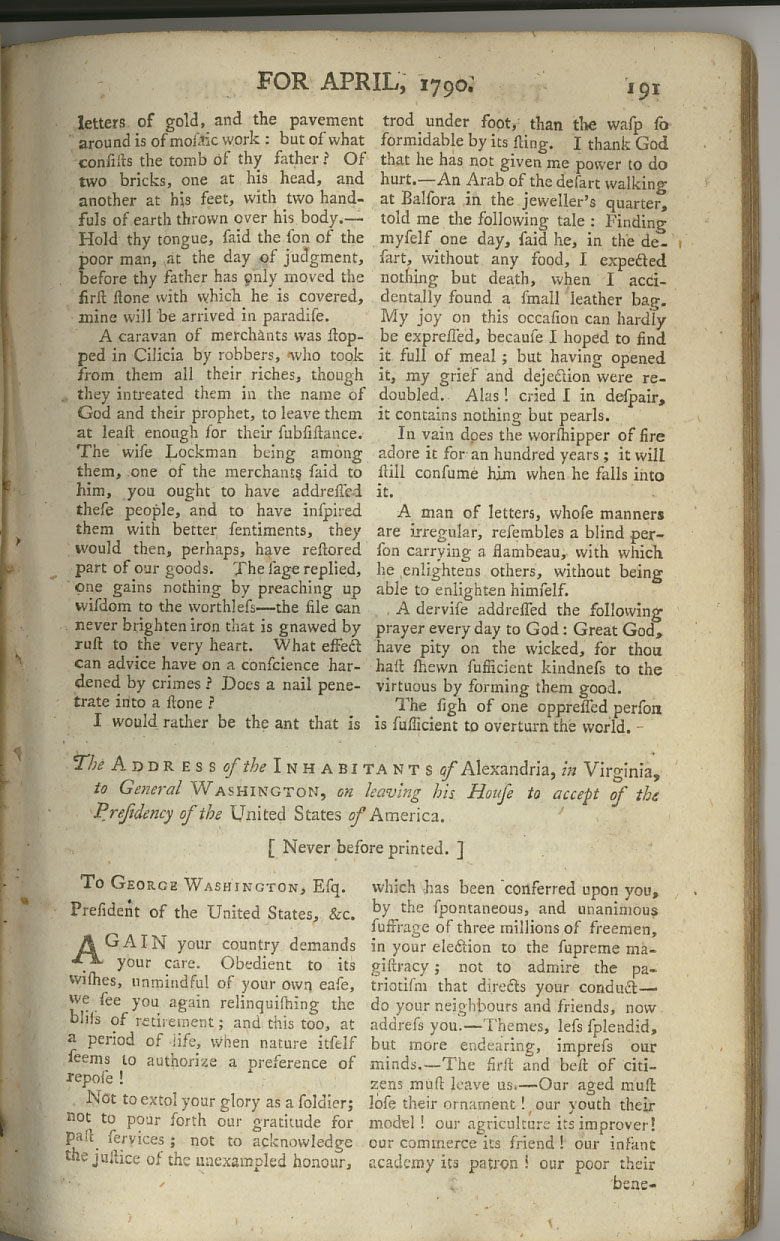 benefactor! and the interior navigation of the Potomac (an event replete with the most extensive utility, already,
by your unremitted exertions, brought into partial use) its Institutor and Promoter.

Farewell! — Go; and make a grateful people happy—a people who will be doubly grateful
when they contemplate this recent sacrifice for their interest.

To that Being, who maketh and unmaketh at his will, we commend you; and after the
accomplishment of the arduous business to which you are called, may he restore to us again the best
of men, and the most beloved fellow citizen!

In behalf of the people of Alexandria

To the Mayor, Corporation, and Citizens of Alexandria.

Although I ought not to conceal, yet I cannot describe the painful emotions which I felt in being called upon to determine whether I would accept or refuse the presidency of the United States. The unanimity in the choice, the opinion of my friends communicated from different parts of Europe as well as from America, the apparent wish of those who were not entirely satisfied with the constitution in its present form, and an ardent desire on my own part to be instrumental in connecting the good will of my countrymen towards each other — have induced an acceptance. Those who know me best (and you, my fellow citizens, are from your situation in that number) know better than any others my love of retirement is so great that no earthly consideration, short of a conviction of duty, could have prevailed upon me to depart from my resolution “never more to take any share in transactions of a public nature.” For at my age and in my circumstances, what prospects or advantages could I propose to myself from embarking again on the tempestuous and uncertain ocean of public life? I do not feel myself under the necessity of making public declarations in order to convince you, gentlemen, of my attachment to yourselves, and regard for your interests. The whole tenor of my life has been open to your inspection, and my past actions, rather than my present declarations, must be the pledge of my future conduct.

In the mean time, I thank you most sincerely for the expressions of kindness contained in your valedictory address. It is true, just after having bade adieu to my domestic connections, this tender proof of your friendship is but too well calculated still further to awaken my sensibility and increase my regret at parting from the enjoyment of private life.

All that now remains for me is to commit myself and you to the protection of that beneficent Being, who on a former occasion hath happily brought us together after a long and distressing separation; perhaps the same gracious Providence will again indulge us with the fame heartfelt felicity.

But words, my fellow citizens, fail me. Unutterable sensations must then be left to more expressive silence, while from an aching heart, I bid you all, my affectionate friends and kind neighbors, farewell! 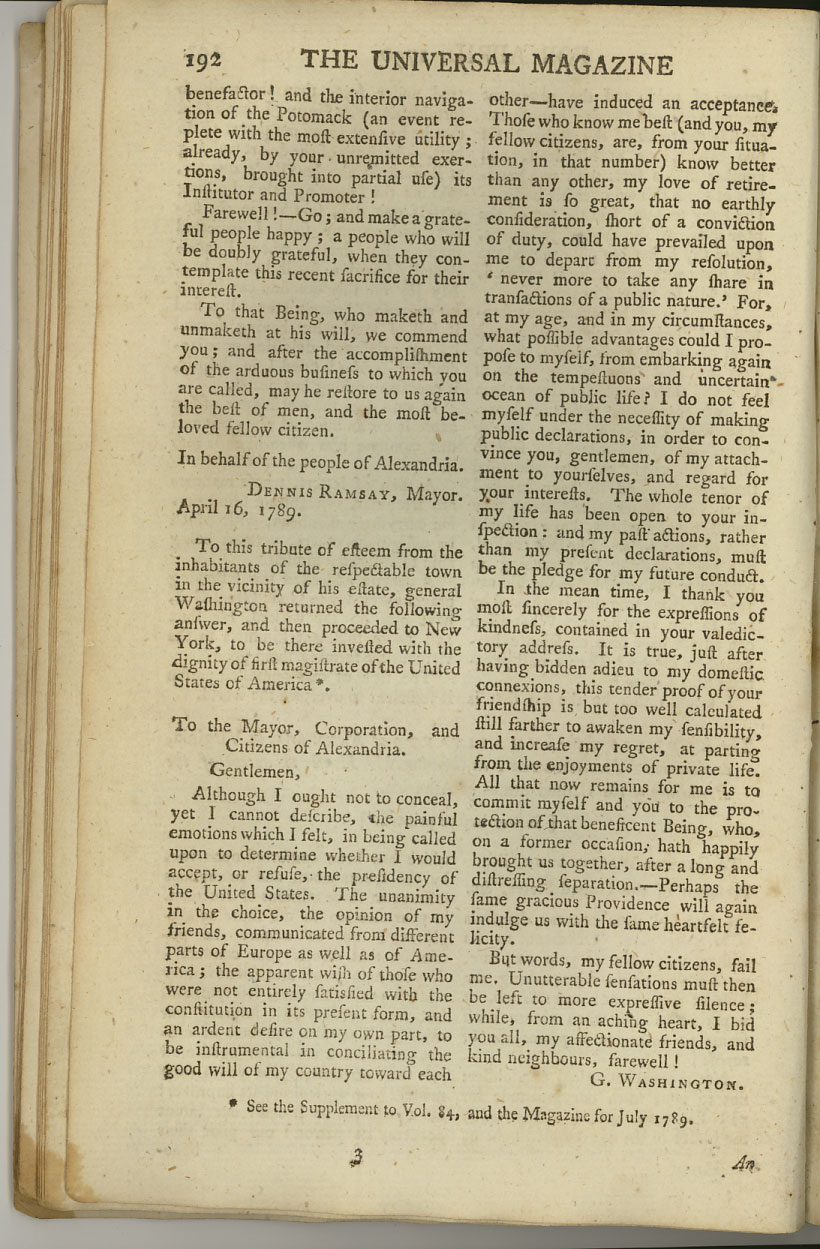 Washington's reluctance to accept the post speaks to his character. Of course, his ownership of enslaved people does not.