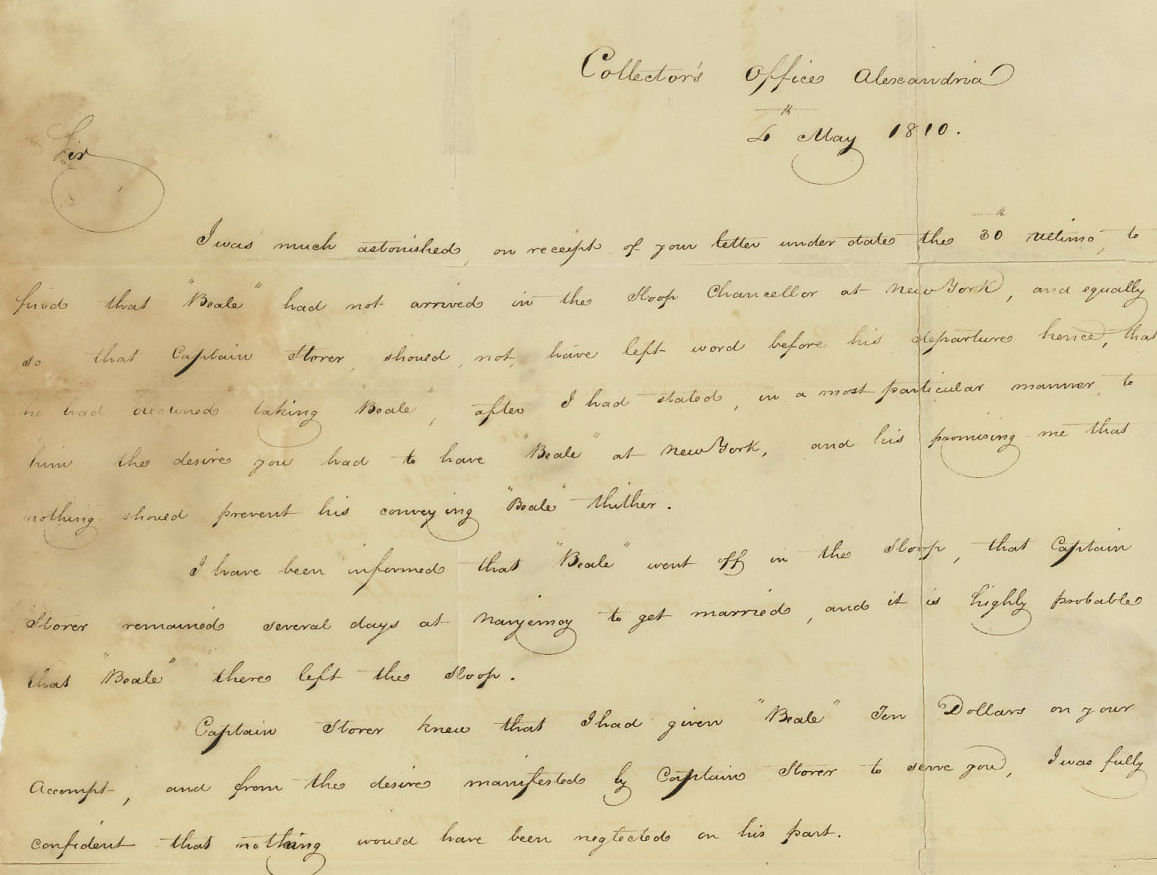 This letter almost certainly refers to an escaped enslaved person named Beale. To be entirely frank, I am both deeply fascinated and deeply saddened by the contents of the letter, however, I try to focus on the fact that Beale escaped his apparent captor.

OurHistoryMuseum condemns all forms of prejudice in the strongest possible terms. We believe the best way never to repeat historical atrocities arising from such prejudice is to surface them and peacefully confront them in the present — because they happened and continue to happen. "Sunlight is the best disinfectant" is one of our core values.

The letter is from C.T. Chapman in the Customs Collector's Office in Alexandria, D.C., and is written to the Collector's Office in New York City. Apparently, Beale (likely enslaved by Chapman) was supposed to travel to New York on Captain Stover's schooner, The Chancellor. He only made it as far as Nanjemoy, Maryland where Captain Stover apparently stopped to get married and Beale made his escape.

I was much astonished on receipt of your letter under date this 30             , to find that "Beale" had not arrived in the Sloop Chancellor at New York and equally so that Captain Stover should not have left word before his departure hence that he had returned lacking "Beale," after I had stated in a most particular matter to him the desires you had to have "Beale" at New York and his promising me that nothing should prevent his conveying "Beale” therein.

I have been informed that "Beale" went off in the sloop, that Captain Stover remained several days at Nanjemoy to get married, and it is highly probable that "Beale” there left the sloop.

Captain Stover knew that I had given "Beale" ten dollars on your account and from this desire manifested by Captain Stover to serve you, I was fully confident that nothing would have been neglected on this part.

I am informed that "Beale" had some intention prior to my requesting him to go to New York of going to Baltimore in consequence thereof I have this day written to the collector of Baltimore on the subject and you may rest assured that every exertion shall be made on this part of this office to find him and if he should appear in the District to have him sent to New York.

Very respectfully,
I have the honor to be,
Your able servant,
C. T. Chapman 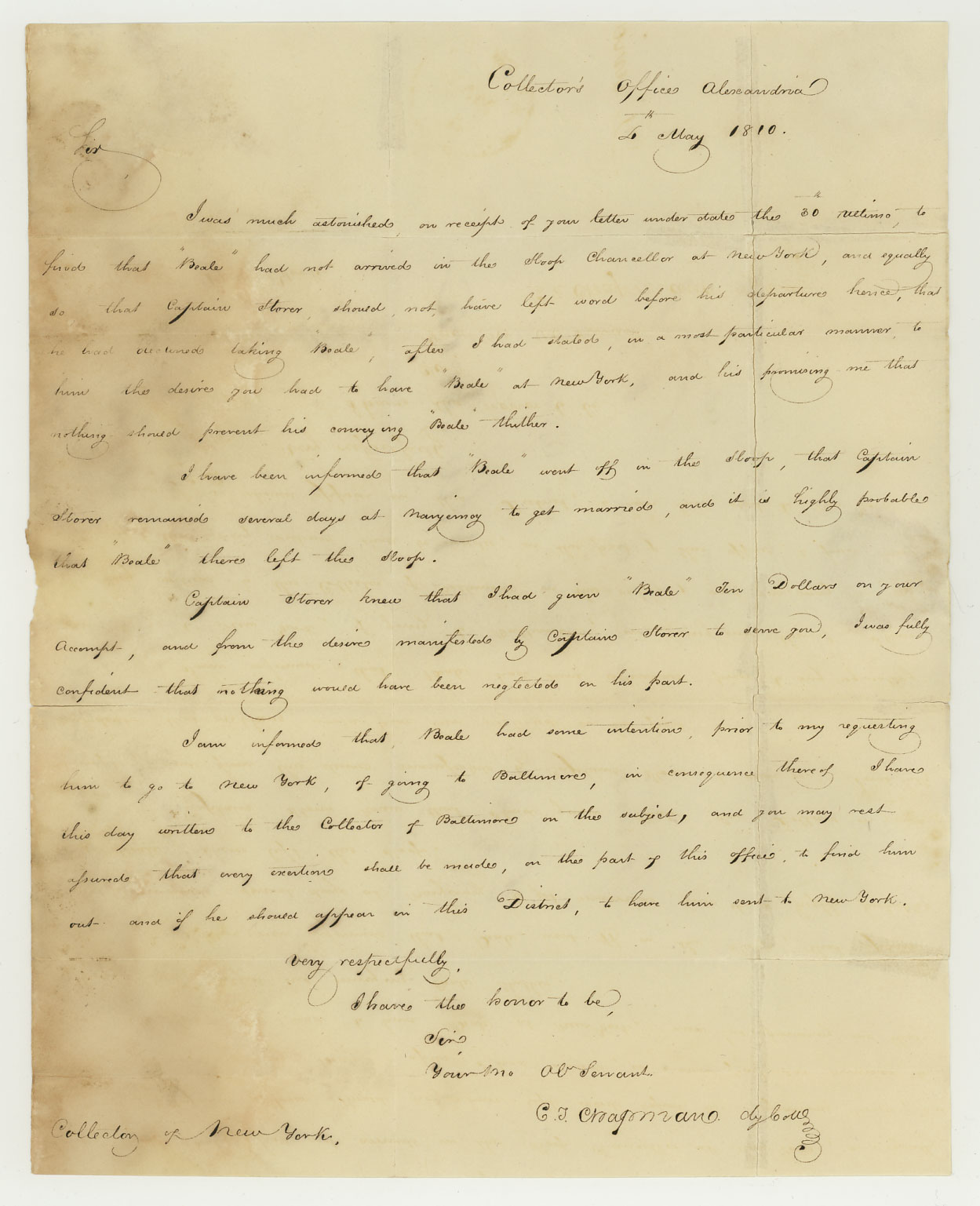 As can be seen in the ad below (and by following the link here), C.T. Chapman was no stranger to handling escaped enslaved people.

Finding escaped enslaved people was a routine occurrence in pre-1861 Alexandria. If you click on the image above, it will take you to the full front page of the December 25, 1815, Alexandria Gazette. There are no fewer than five advertisements either selling people or attempting to hunt down those previously sold.

I think this memory is especially poignant and important as we enter Black History Month on Monday. Here are some additional ads from that same Christmas Day front page. 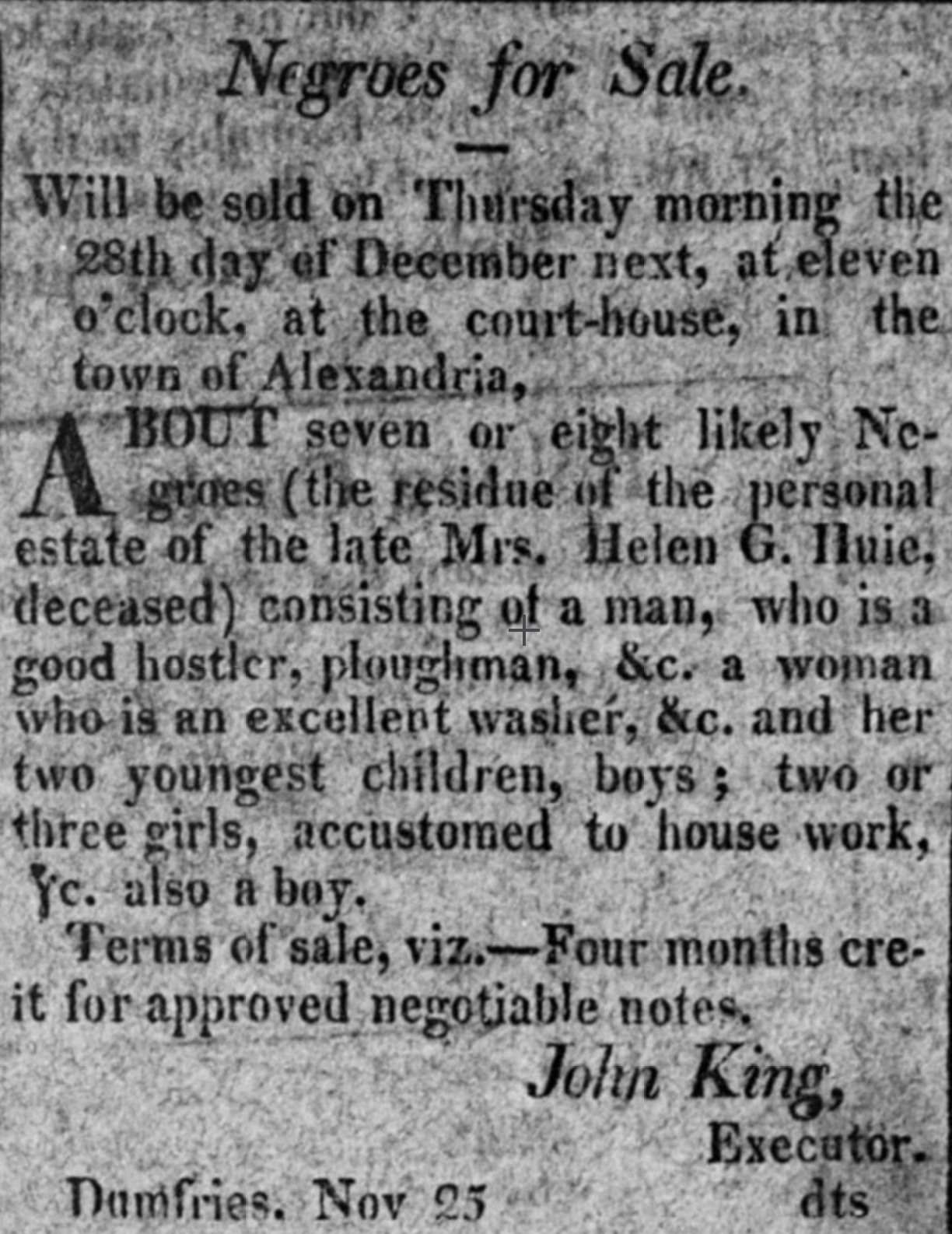 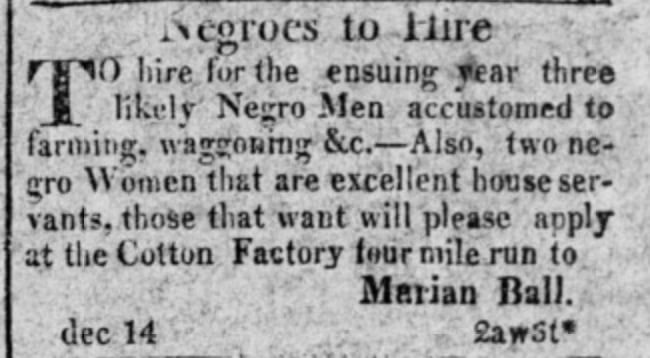 In 1810, when this letter was written, 40% of the population of Virginia was enslaved.