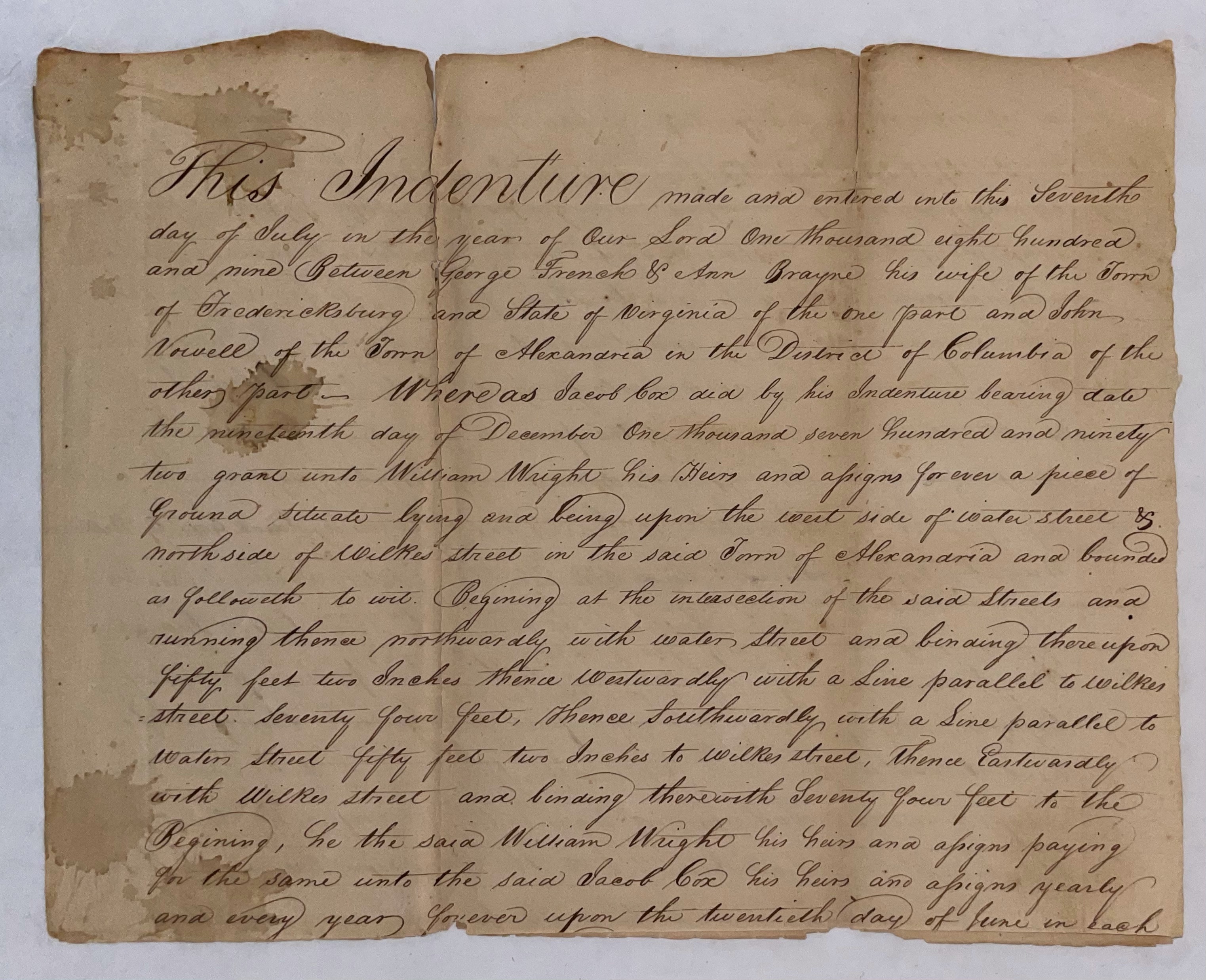 The year was 1809, James Madison had been president for just a few months, Alexandria was still part of D.C., Alexandria's Lee Street was still known as Water Street, and George French had recently completed his fifth of eight terms as mayor of Fredericksburg, Virginia.

John C. Vowell was a successful Alexandria business person who would marry Mary Smith the following year. Their daughter Sarah would marry Francis Smith, well-known for being Robert E. Lee's lawyer in the dispute over Arlington house and Arlington cemetery. They were also noteworthy for living in the Vowell-Smith house.

George French's wife, Anne Brayne French, had purportedly danced with George Washington when he went to Fredericksburg as part of his post-Revolutionary War peace tour. She was given the nickname the "Barefooted Doll" by Anne's sister, who was angry about the dance. Anne's response was, "tell her that General Washington not only danced with the 'Barefooted Doll,' but called the next morning and spent three hours in her company."

This is how rumors get started.

The document below describes a simple real estate transaction between the Frenches and John Vowell in an extremely complicated way. Using the powers of law school, I have decoded the document, which is also pictured and transcribed below.

Still, why would George and Anne French have real estate dealings in Alexandria? He was a successful doctor in Fredericksburg 50 miles away, a full day's ride at the time. Why does the transaction happen exactly between two of his Fredericksburg mayoral terms? Does anyone know or want to venture a guess?

Here's a map of the property in question: 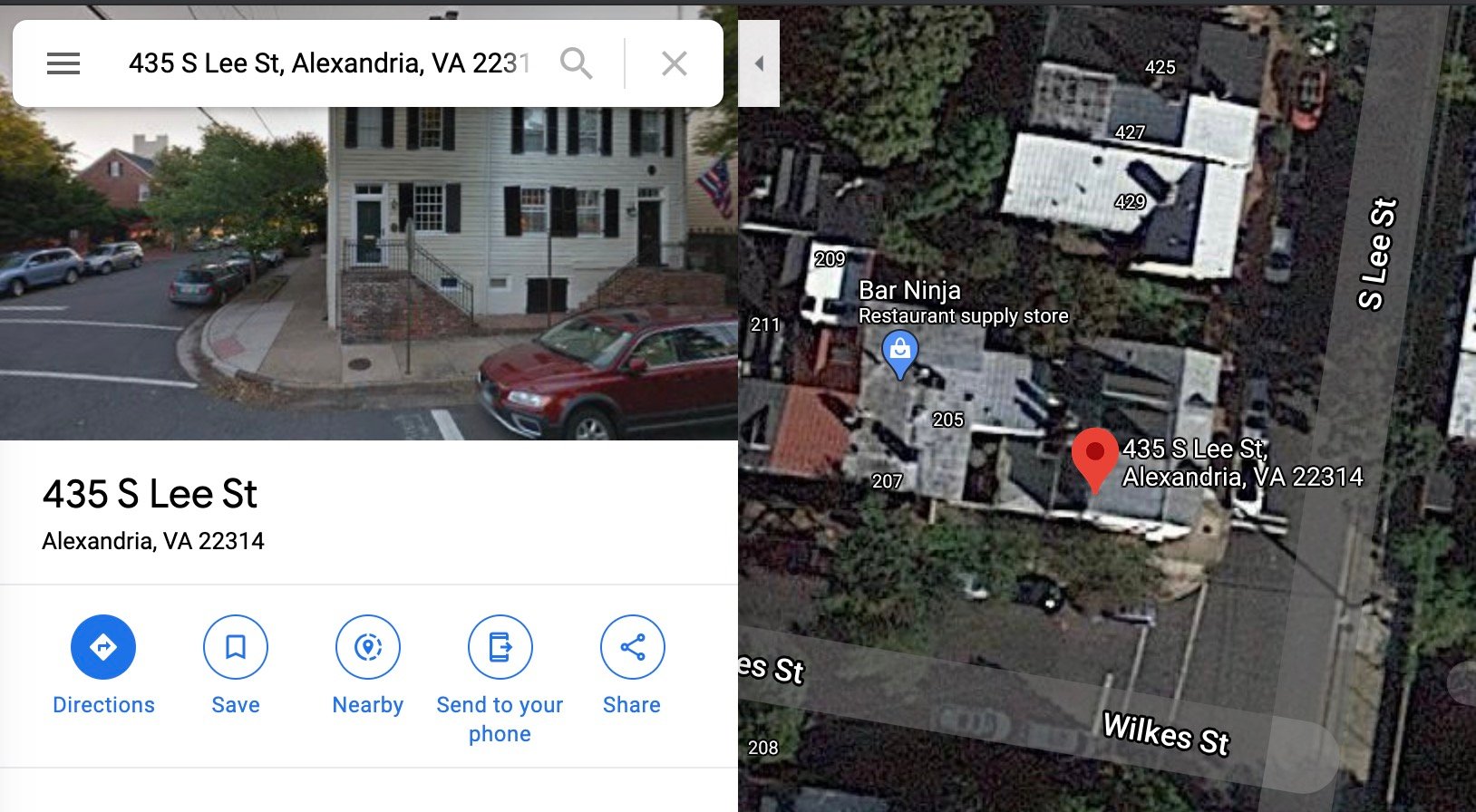 Transcription is interspersed with the images below:

This indenture made and entered into this seventh day of July in the year of our Lord 1809 between George French & Anne Brayne his wife of the town of Fredericksburg and State of Virginia of the one part and John Vowell of the town of Alexandria in the District of Columbia of the other part. Whereas Jacob Cox did buy his indenture bearing the date the 19th day of December 1792 grant unto William Wright his heirs and assigns forever a piece of ground situated and lying and being upon the west side of Water Street and the north side of Wilkes Street in the said town of Alexandria and bounded as follows to wit. Beginning at the intersection of said streets and running fence north Fridley with water Street and finding their upon 50‘2“ thence westwardly with a sine parallel to Wilkes Street 74 feet, thence southwardly with a sine parallel to water Street 50‘2“ to Wilkes Street, thence eastwardly with Wilkes Street and finding there with 74 feet to the beginning. He the said William Wright his heirs and assigns paying for the same onto the said Jacob Cox his heirs and assigns yearly and every year forever upon the 20th day of June in each 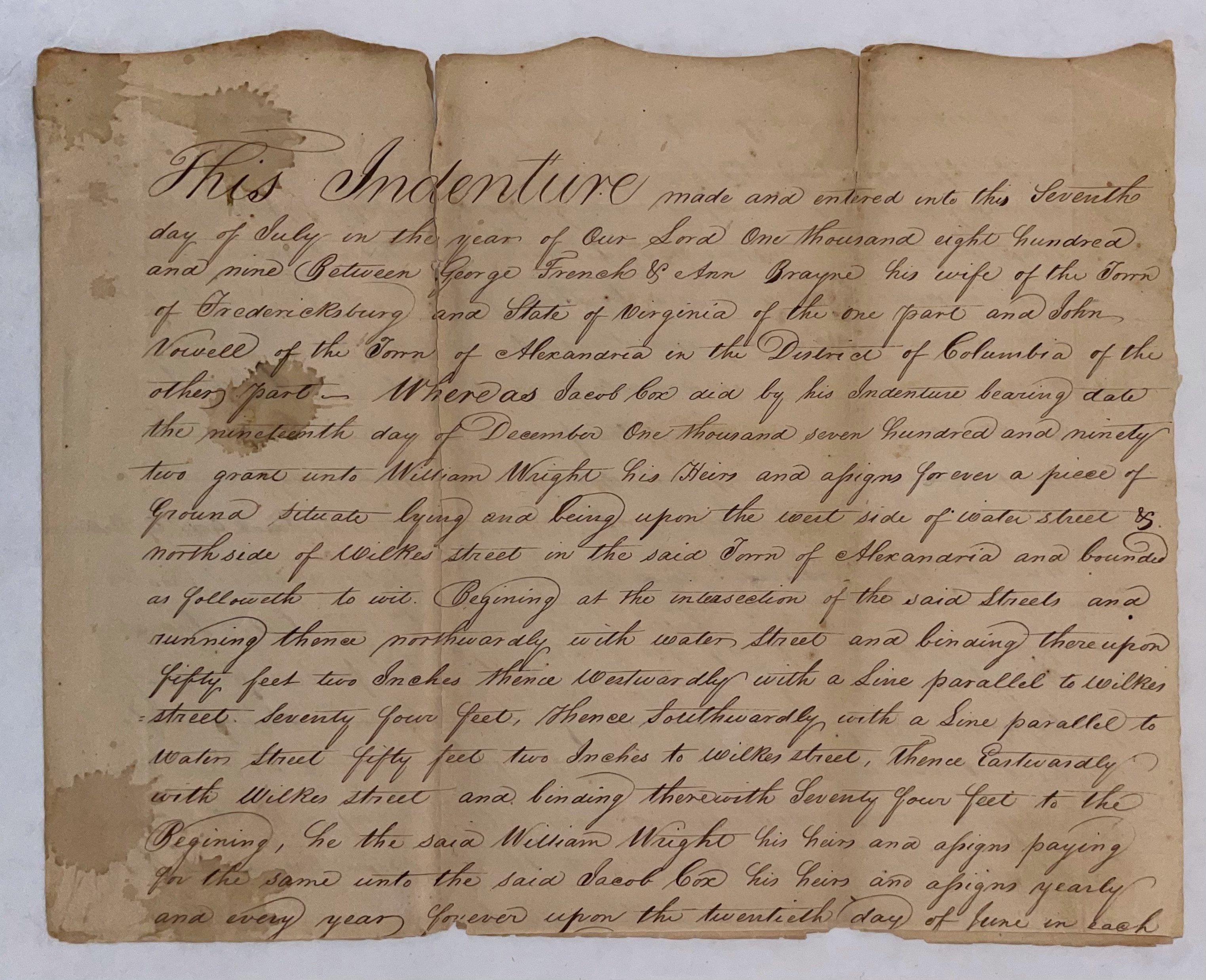 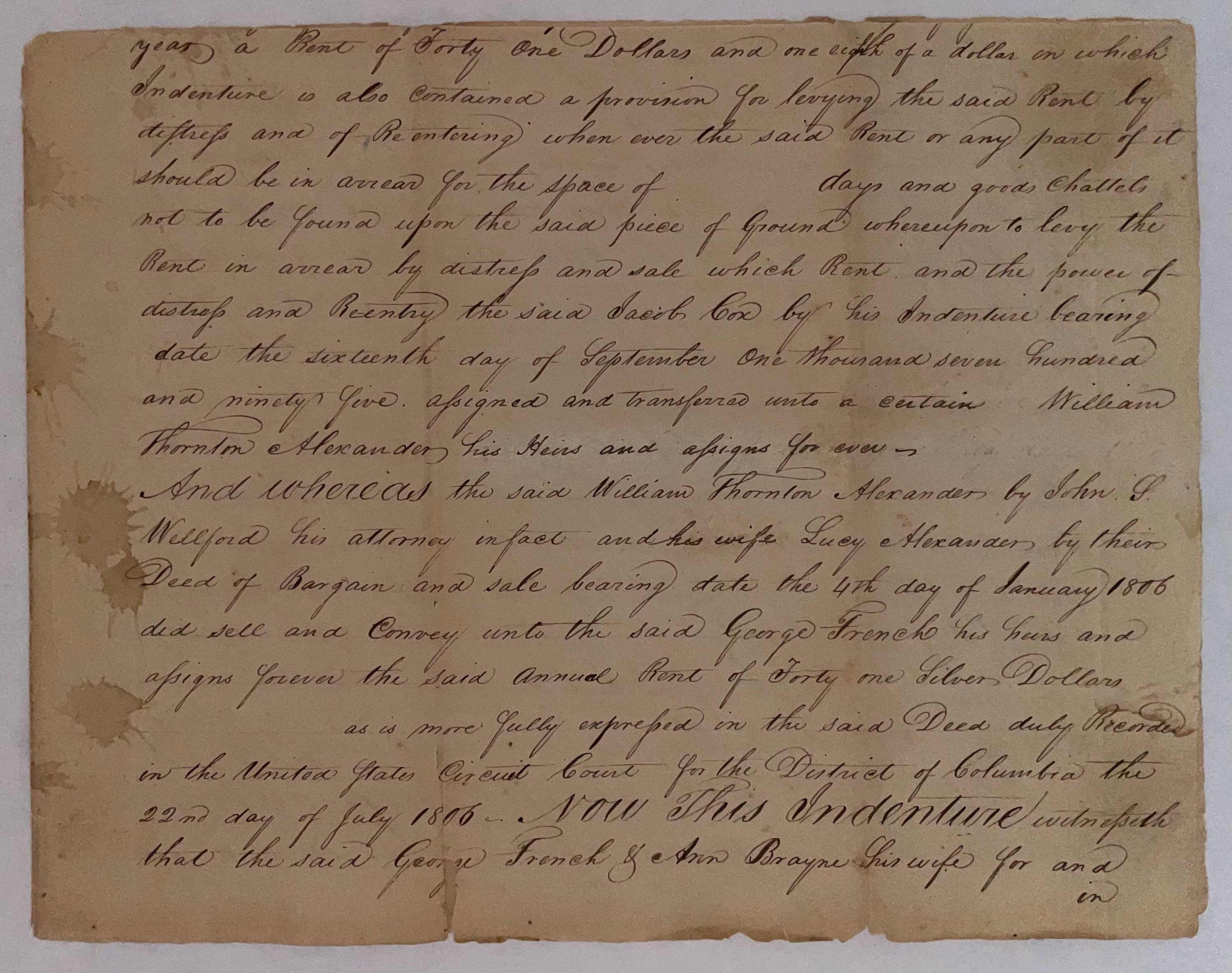 in consideration of the sum of 107 £.09 current money of Virginia to them in hand paid by the said John Vowell at and before the in sealing and delivery of these presents (the receipt whereof is hereby acknowledged) have granted, bargained, sold, assigned and transferred and buy these presents to Grant, bargain, sell, assign and transfer onto the said John Vowel his heirs and assigns forever, they said annual rent of 41 silver dollars and 1/8 of a dollar issuing out of the piece or parcel of ground before mentioned, and the powers of distress and reentry are reserved and expressed in the indenture of lease from the said Jacob Cox to William Wright before mentioned and also all the estate, right, title, interest claim and demand whatsoever of them The said George French and Anne Brayne his wife, of, in, and to the sad piece or parcel of ground and premises and every part and parcel thereof - to have and to hold the said rent with the powers of distress and reentry as express in said indenture of lease with all covenants clauses and stipulations contained there in, unto said John Vowell his heirs and assigns forever and the sad George French and Anne Brayne 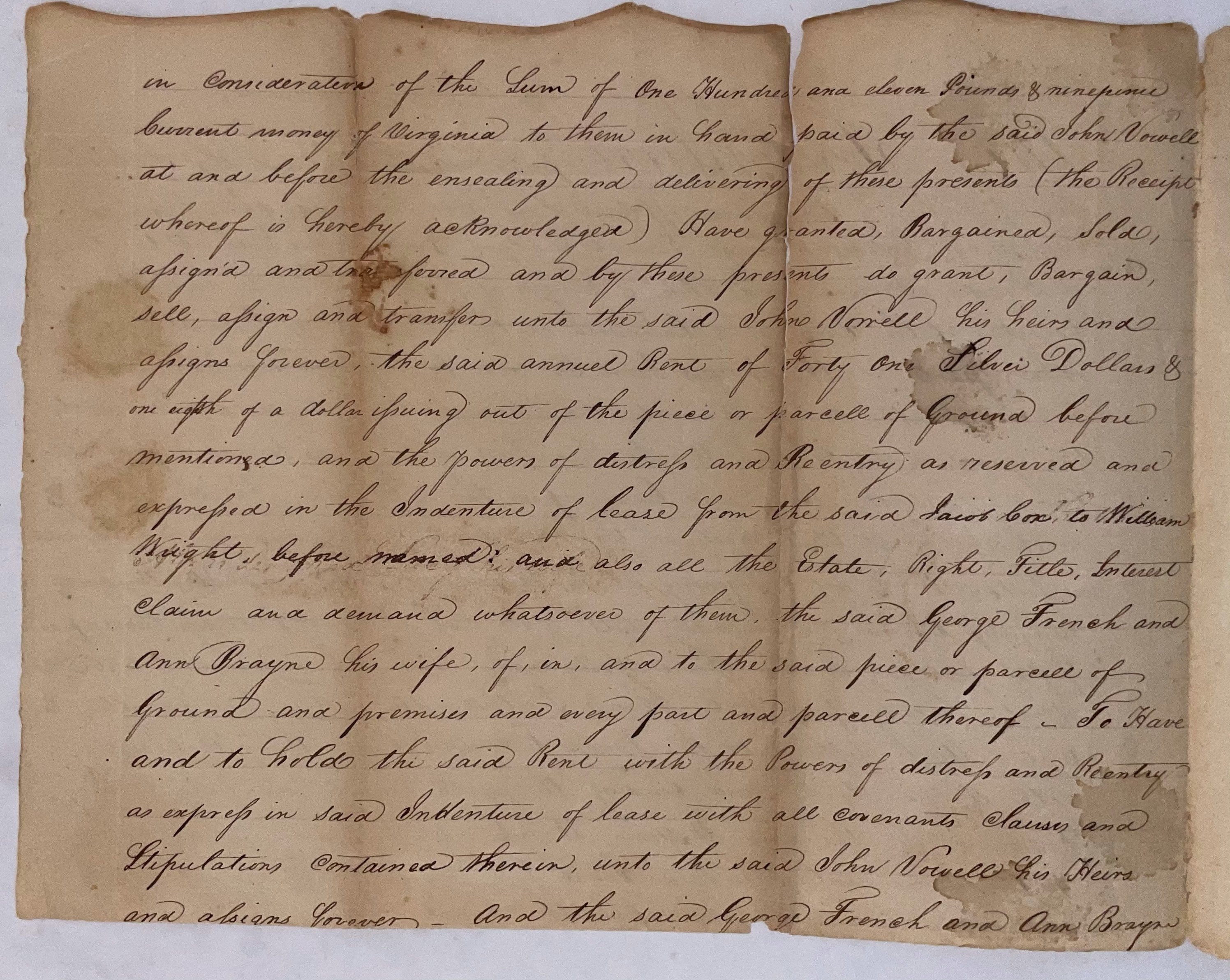 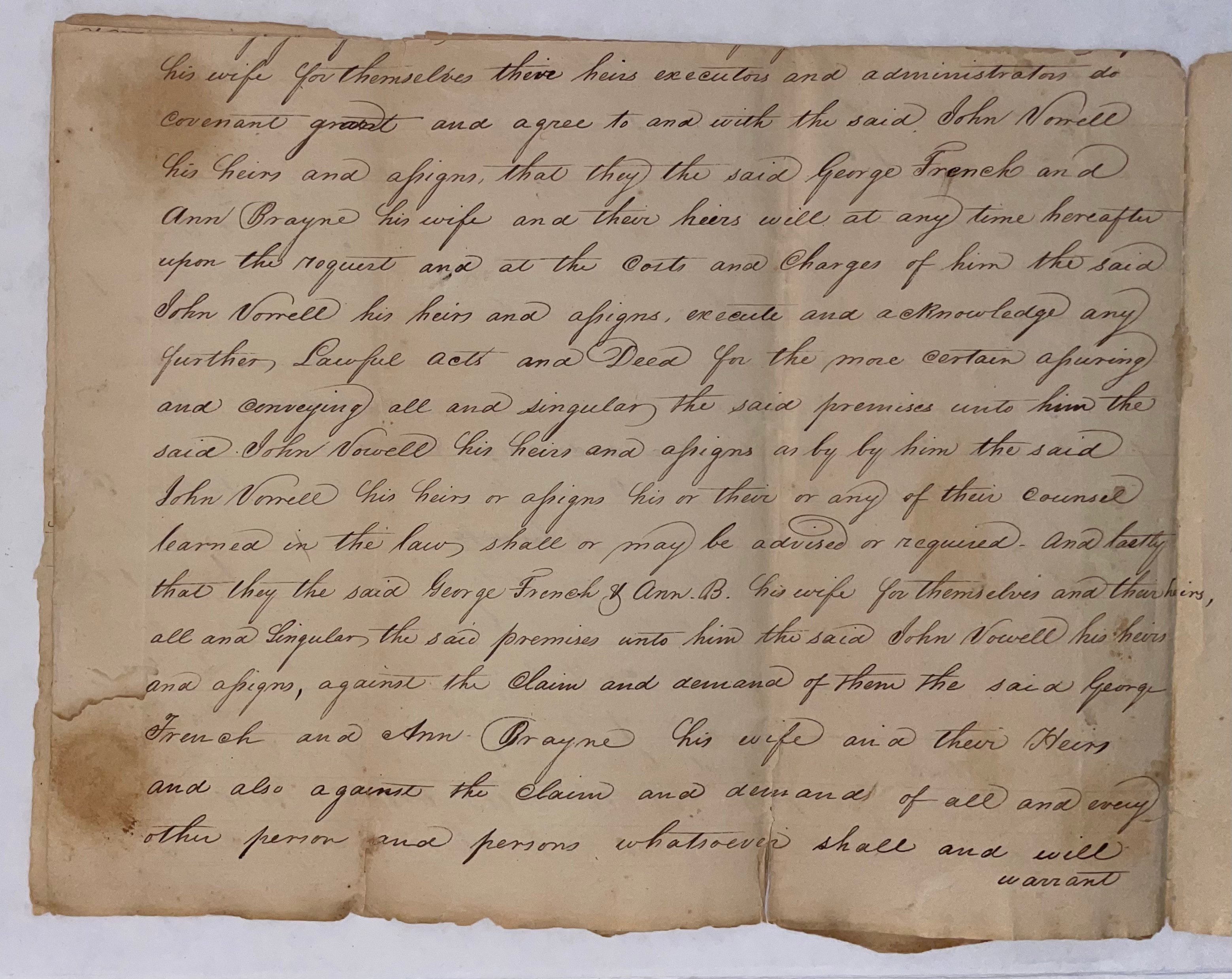 warrant and forever defend by these presents –

Received Alex July 12, 1809 of John Vowell his note for $272 which shall which when paid will be in full of the within 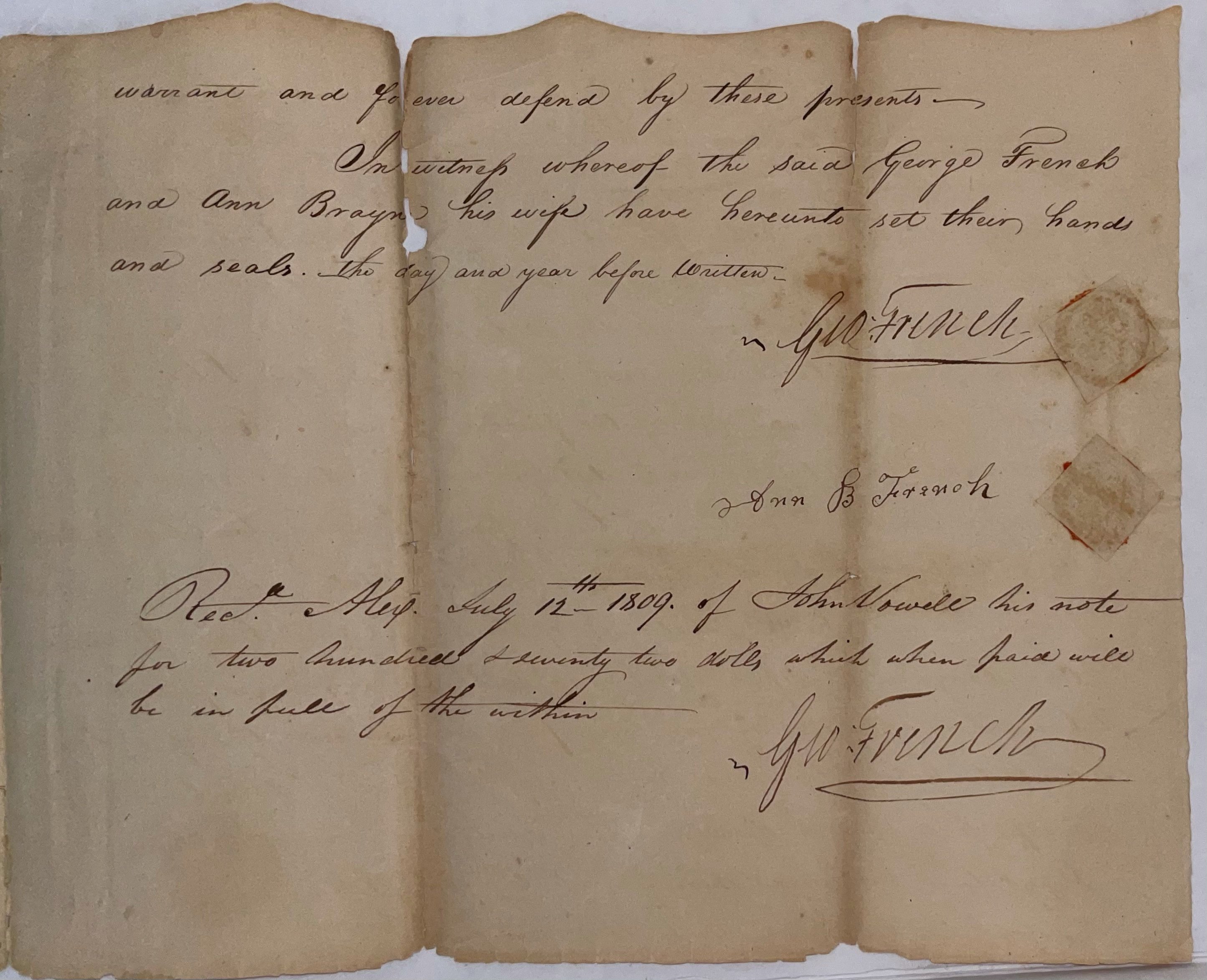 At the United States Circuit Court of the District of Columbia continued and held for the County of Alexandria the 12th day of July 1809.

George French acknowledged this deed receipt to John Vowell, to be his act and deed which together with a commission and return for the foregoing conditions of Anne Brayne French, wife of the said George are ordered to be recorded 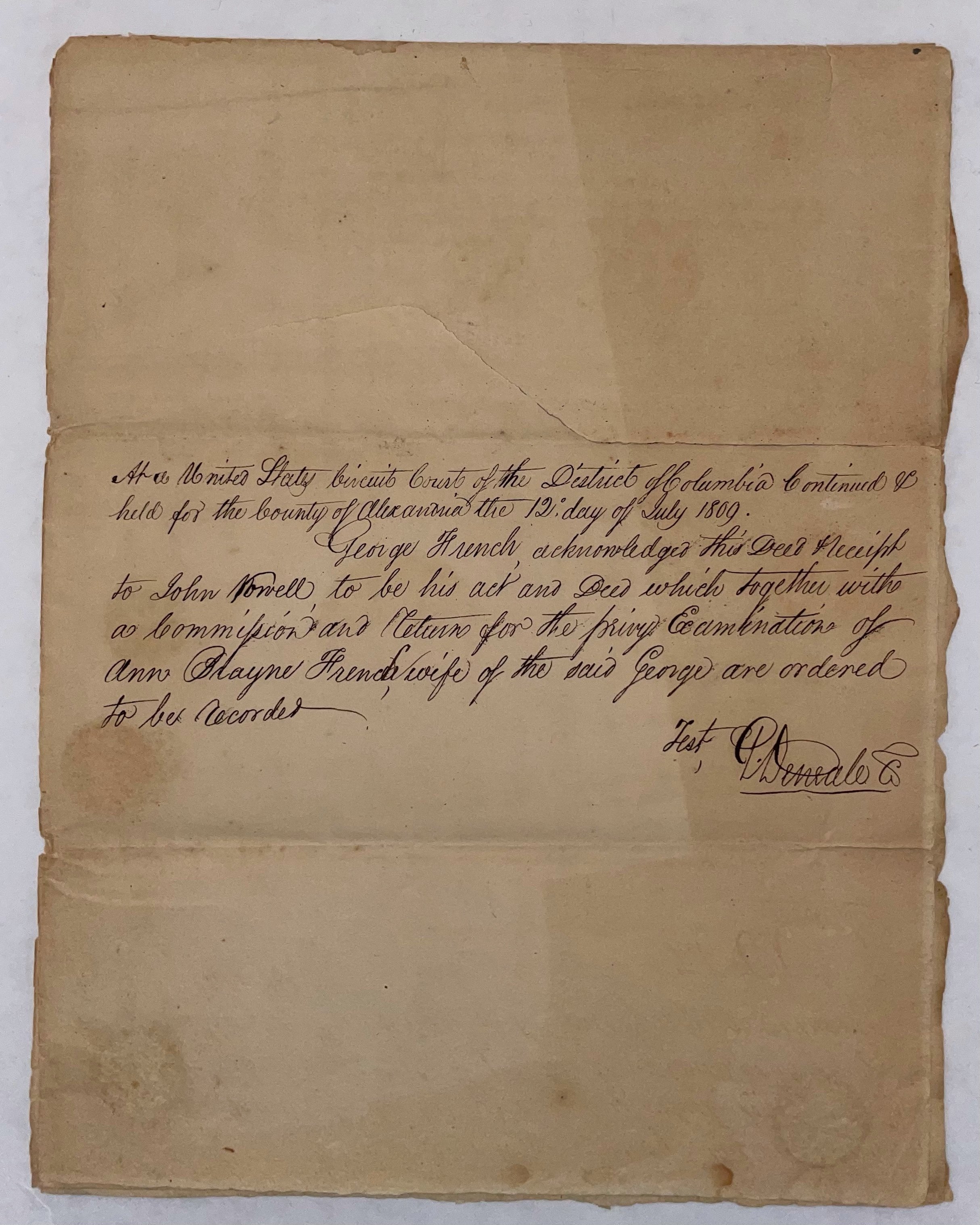