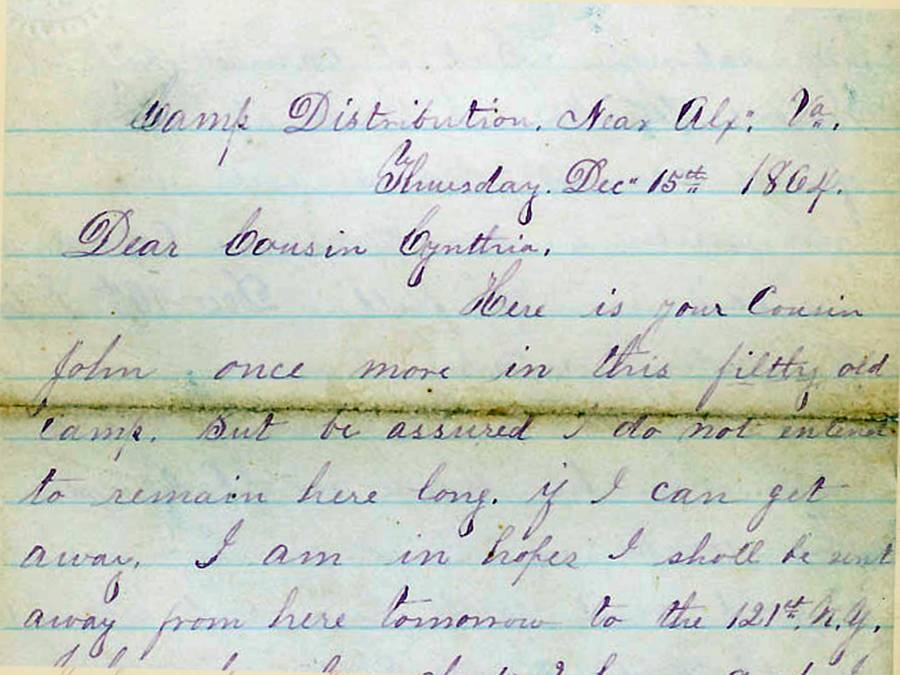 Private John M. Lovejoy Writes to His Cousin… AND Future Wife in 1864

As the Civil War churned on, in 1864, Private John M. Lovejoy stopped briefly in Alexandria to write a letter to his cousin, Cynthia, and describe the deplorable conditions at his camp. What piqued my curiosity was that he addressed her as Cousin Cynthia and closed the letter by signing it as "your true blue soldier Cousin John." Something about this struck me as unusual.

Then I was able to look up Private Lovejoy's history. It turns out he survived the war, he later married Cynthia, and they had two children. Marrying one's cousin was relatively common until the late 1800s, as this New York Times article talks about in more detail.

Thanks to Michael Brown Rare Books, who appears to be selling Private Lovejoy's 1865 diary for $2000, we have an excellent history for John M. Lovejoy and his future wife, Cynthia Allen:

During the Civil War, Lovejoy left the farm and enlisted as a private on 7 August 1862 at Roseboom, to serve three years in Co. G, 121st New York Volunteers. Company G was principally recruited from Herkimer, Herkimer County; Cherry Valley, Lovejoy’s hometown of Roseboom, Decatur, Middlefield, Westford, and Worcester, all of Otsego County. According to enlistment records, John stood 5 feet 7½ tall, had red hair and blue eyes. He was a farmer by occupation.

Lovejoy was mustered in on 23 August 1862. John’s older brother Allen Lovejoy (1839 - aft 1905) mustered into Co. G, 121st New York Volunteers at the same time as his brother. John was transferred to Co. C, 22nd Regiment Veterans Reserve Corps in January 1865. He mustered out of military service on 3 July 1865 at Cleveland, Ohio.

Within a month of mustering in, John M. Lovejoy was being held in reserve in the fields below South Mountain while the battle thundered through the peaceful valley. When his regiment moved on to Antietam, John and his brother, Allen, were placed on hospital duty in Burkittsville, and remained there for over three months.

It is said that John M. Lovejoy performed splendid service with his regiment at Winchester, Fisher Hill, and Cedar Creek; was wounded at Charleston, 21 August 1864, sent to Baltimore, Maryland and was soon after transferred to Chestnut Hill, Philadelphia; while in Philadelphia he received a furlough for twenty days. He returned to his regiment 25 December 1864 was promoted to corporal and acted as Color Guard to the regiment until 25 June 1865 when he was discharged from military service at Hall’s Hill, Virginia. John and his brother Allen both survived the war, and both witnessed the surrender at Appomattox Courthouse in April 1865

Lovejoy returned to Roseboom after the war, returned to farming, married Cynthia Allen, of Roseboom, had two children, but he never fully recovered from the effects of his wound, and in 1870 left the farm and went into general agency business; at one time being found as a painter. He applied for an invalid pension in 1879.  He joined Upton Post (G.A.R.) at South Valley as charter member; served as Adjutant for seven years and Quartermaster two years. He was a Justice of the Peace for ten years at South Valley, New York.

In 1900, his wife Cynthia, applied for a widow’s pension, thus Lovejoy would have died sometime between the 1892 NY State Census and the 1900 U.S. Census.

Now let's peer into the relatively non-scandalous courtship of these two kissing cousins 157 years ago.

Here is your Cousin John once more in this filthy old camp. But be assured I do not intend to remain here long, if I can get away. I am in hopes I shall be sent away from here tomorrow to the 121st New York.

I have been here about two hours and I have been here quite long enough to satisfy me. Our dinner was the worst I have had for more than a year. It consisted of coffee, quote bean soup“, _ tack and such “hard tack“ I never saw but once before and that was the first we ever drew after our regiment got to Washington. I could hardly break one of them with my “doubled fist”. Well Cynthia you will think I am a miserable soldier to find fault with 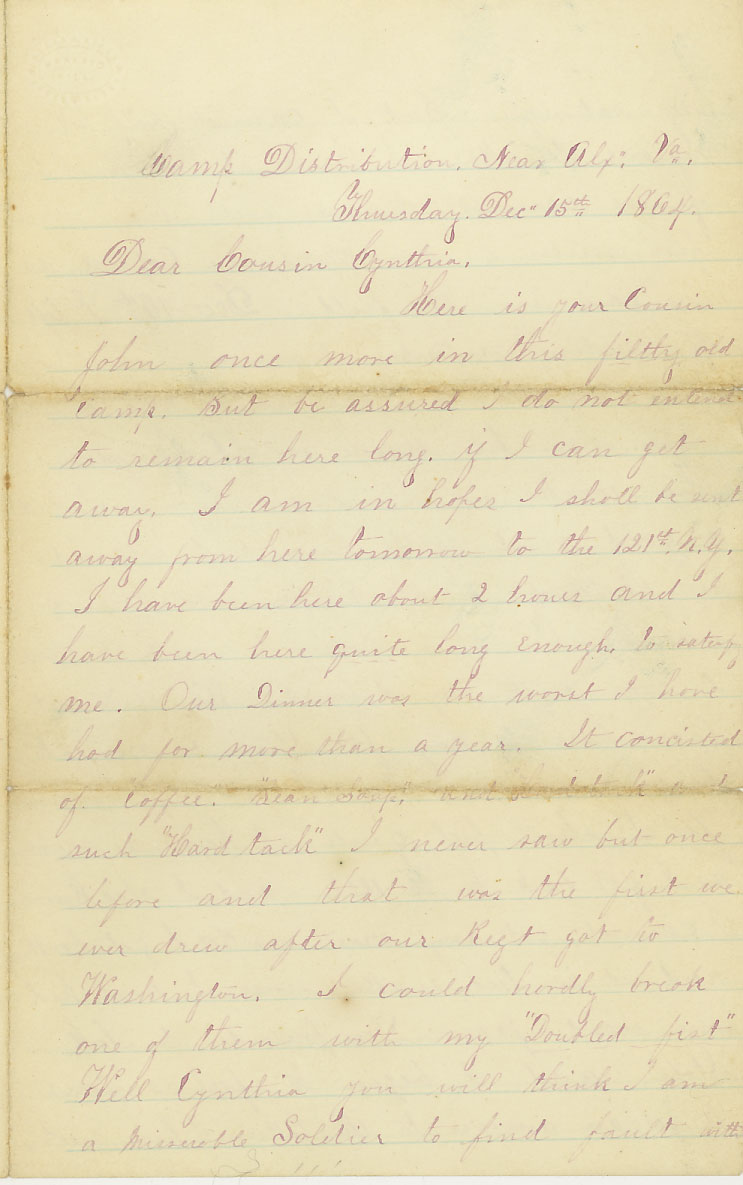 my rations.
But I cannot what anyone thinks. I think it is a shame if we cannot live as well here within 5 miles of our national capital as we can in the field. December 16 I left off visiting yesterday because a fellow I was acquainted with came and called after me. His name is J.C. Langdon. He works in the mess room. I had a good visit with him and obtained his photograph I had supper with him and was much better satisfied with it then I was with my dinner. We will not leave here today for there is none to be sent away today. I hope to go tomorrow for I shall feel quite at home as soon as I get back to the 121st, and I also know I cannot get anymore until I get back end it is two weeks since I have had one word from dear friends in York State and I begin to feel anxious to get an answer to these letters I have wrote.

II have been to work this a.m. shoveling sand to repair the vadds and “blistered one of my soft hands“, don’t you fite me? I have to get hardened to it for I expect rough times for the next eight months if I live. My friend Bernard called upon me last night and we enjoyed ourselves with our usual “social chat.” I shall soon be separated from him for good. But then what is that to what it was to leave such “dear friends“ as I did in Otsego 2 weeks ago, last night. I hope you get to meet those I have left but I know if I do not show meet them in heaven if we prove faithful to the trust already given to us after we got through with our work this afternoon the sergeant came out with a canteen of whiskey for us. but I gave it a good “letting alone“ I was the only in the squad but what swallowed the beverage. 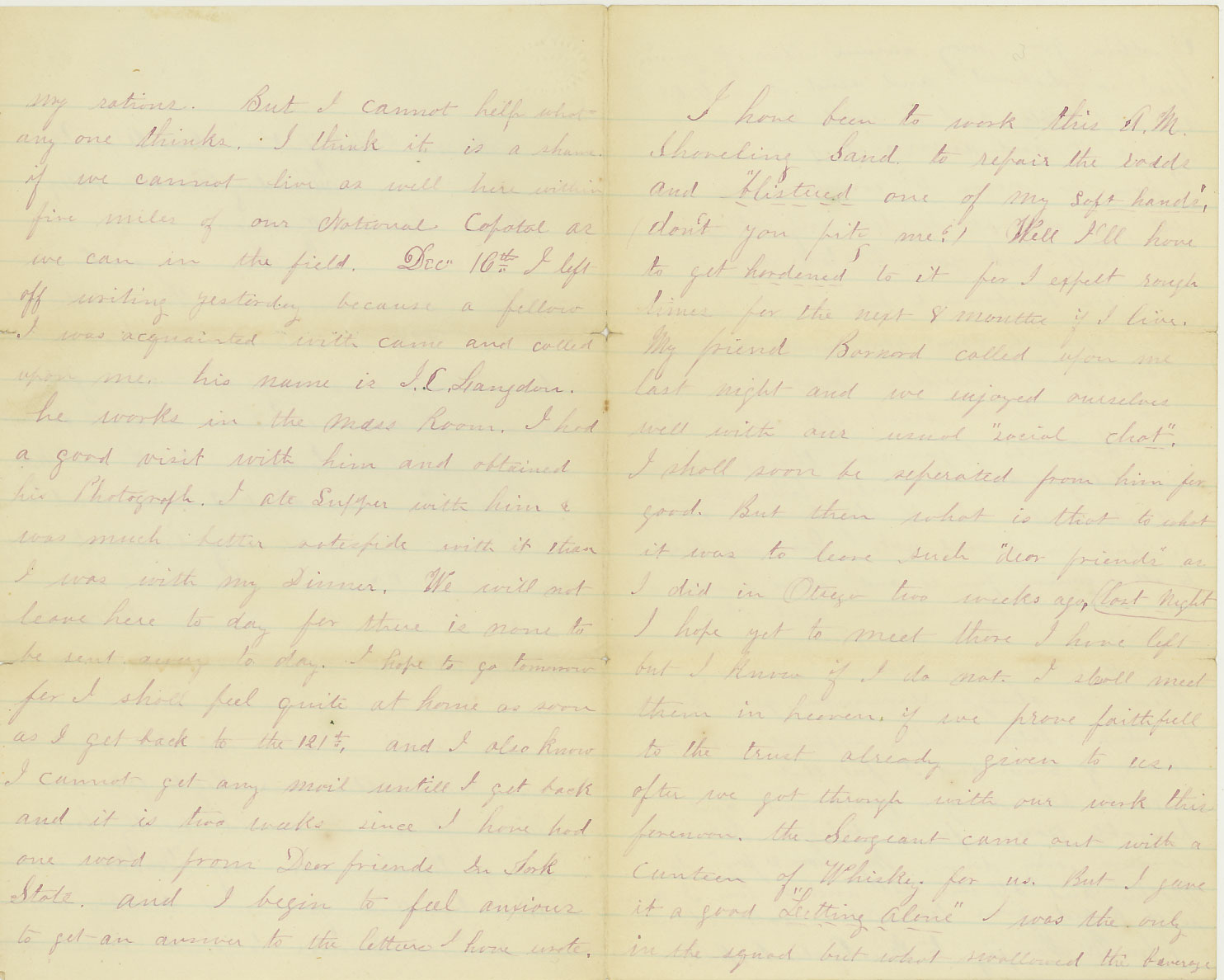 Cynthia you may answer this if you feel so disposed and send it to G company 121st New York south vale and I will be there to receive it and answer it if it is possible I have no news to communicate so I will not attempt to tell any stories.

But will ask you to tell me all the news in Roseboom and Seward if there is any. Especially about your humble correspondent or any of his friends, also tell me how the service went off at South Valley last Sabbath (if you was there) how many was baptized. I should like to hear all about it also if they have started a recital in Seward yet. Give my respects to all inquiring friends and please answer all the letters I have written and then I know I shall soon have the pleasure of reading at least all of your four letters from cousin Cynthia. Please always remember your soldier friends and relatives while supplicating at the throne of grace and I feel that soon we will be blessed by permanent and honorable peace for I believe rebellion is now going down. My “love and pray” to mother and all her rest as ever I am with respect your true blue soldier Cousin John M Lovejoy to Mrs. Cynthia A. Allen 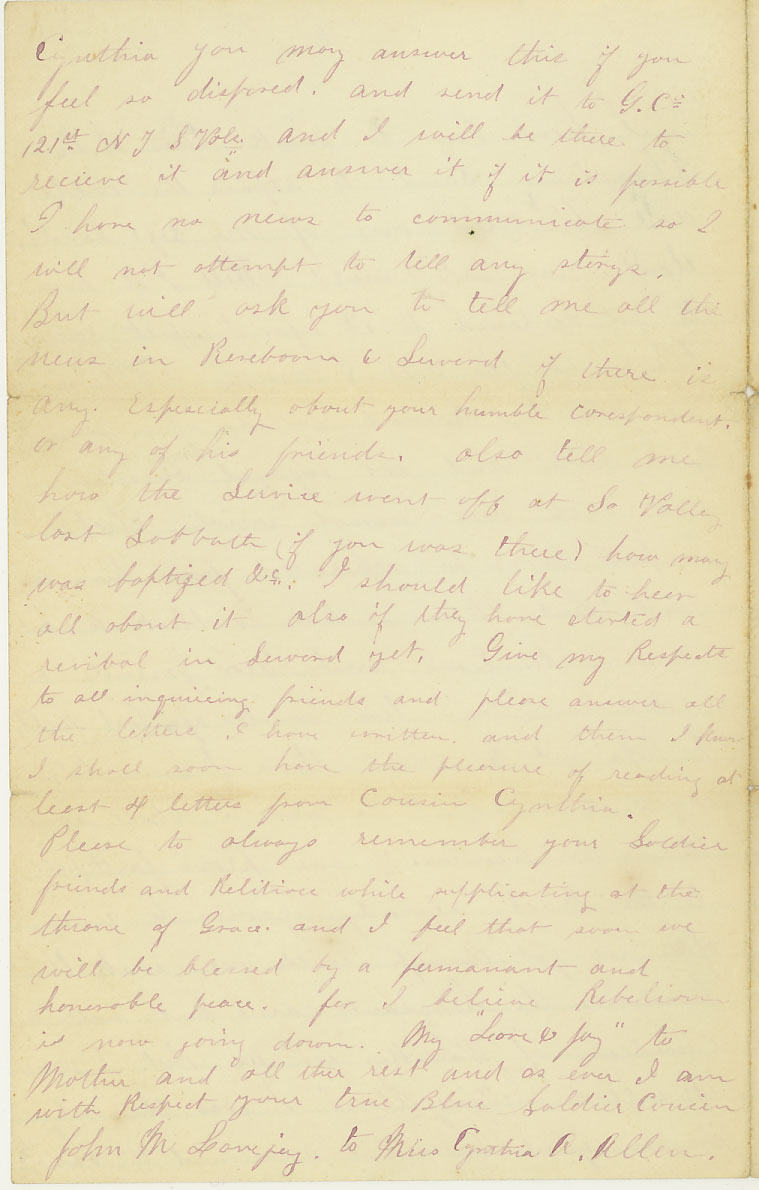