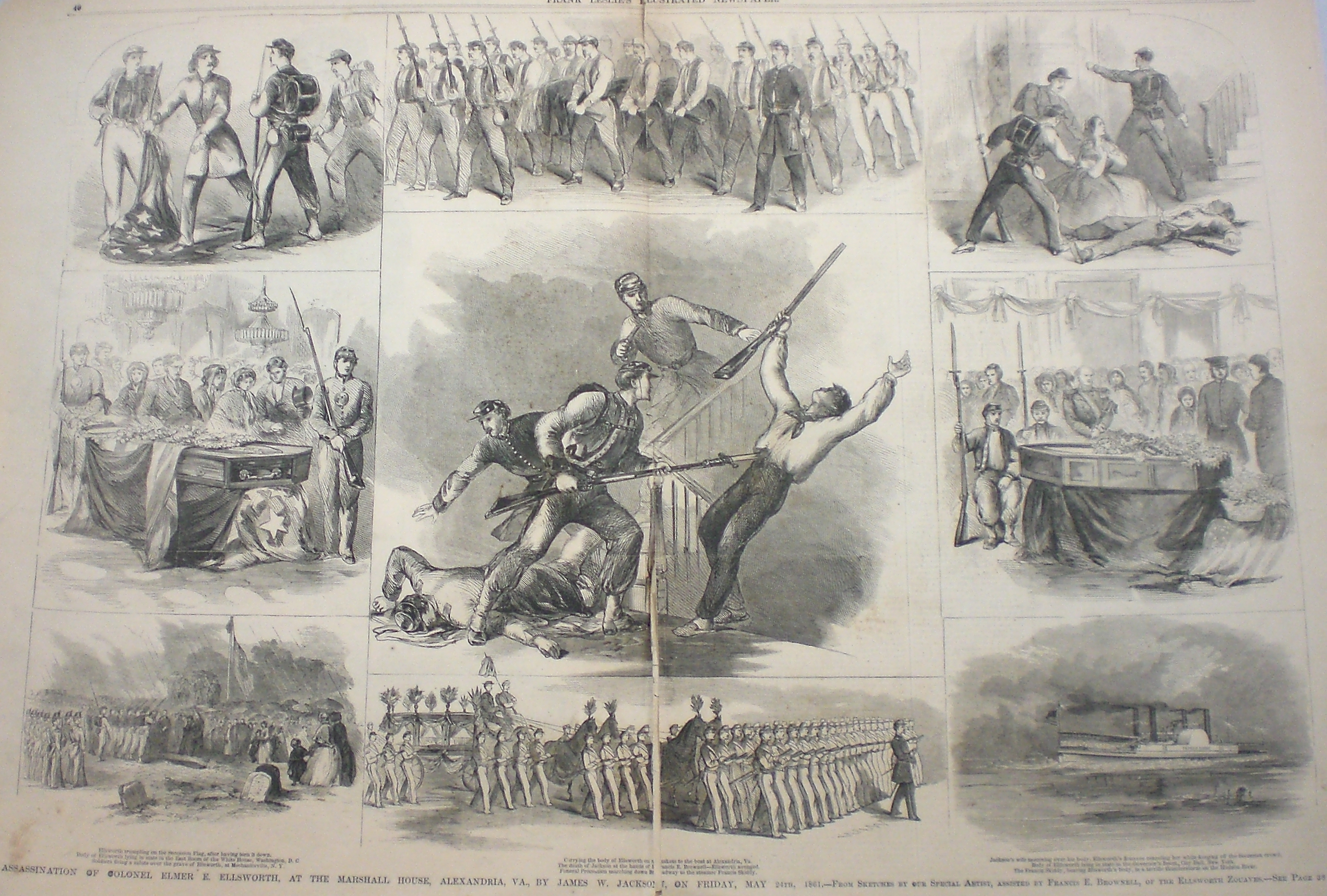 This article picks up where yesterday's article left off. Yesterday, I shared the front page of the New York Tribune's May 26, 1861 edition, 160 years after the Marshall House (King Street) murder of Colonel Elmer Ellsworth. Today, I will focus on the June 1, 1861, edition of Frank Leslie's Illustrated Newspaper.

Frank Leslie's Illustrated Newspaper, later renamed Leslie's Weekly, was an American illustrated literary and news magazine founded in 1855 and published until 1922. It was one of several magazines started by publisher and illustrator Frank Leslie.

Throughout its existence, the weekly provided illustrations and reports—first with wood engravings and daguerreotypes, later with more advanced forms of photography—of wars from John Brown's raid at Harpers Ferry and the Civil War until the Spanish–American War and the First World War.

Surviving issues today are highly prized as collectors' items for vividly depicting American life during the seven decades of its existence. Many distinguished writers were featured in its pages.

The nine panels in this illustration tell the story of the murder of Colonel Elmer Ellsworth, the subsequent killing of his assailant, James Jackson, by Private Francis Brownell, and the other subsequent events.

LINK TO PART 1 of this Marshall House series

LINK TO PART 3 of this Marshall House series 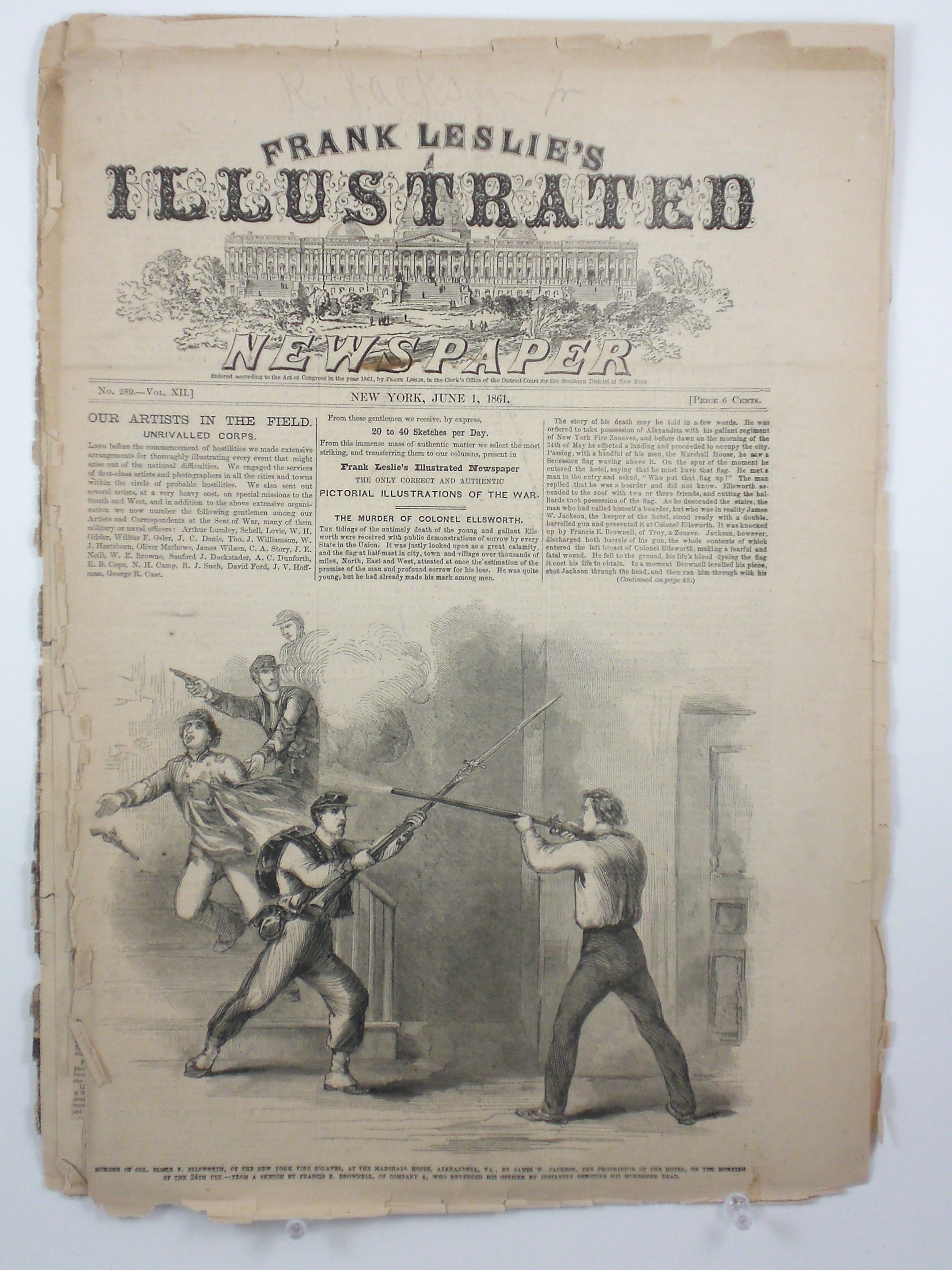 Panel #1: Colonel Ellsworth recovers the secessionist flag from the roof of the Marshall House. 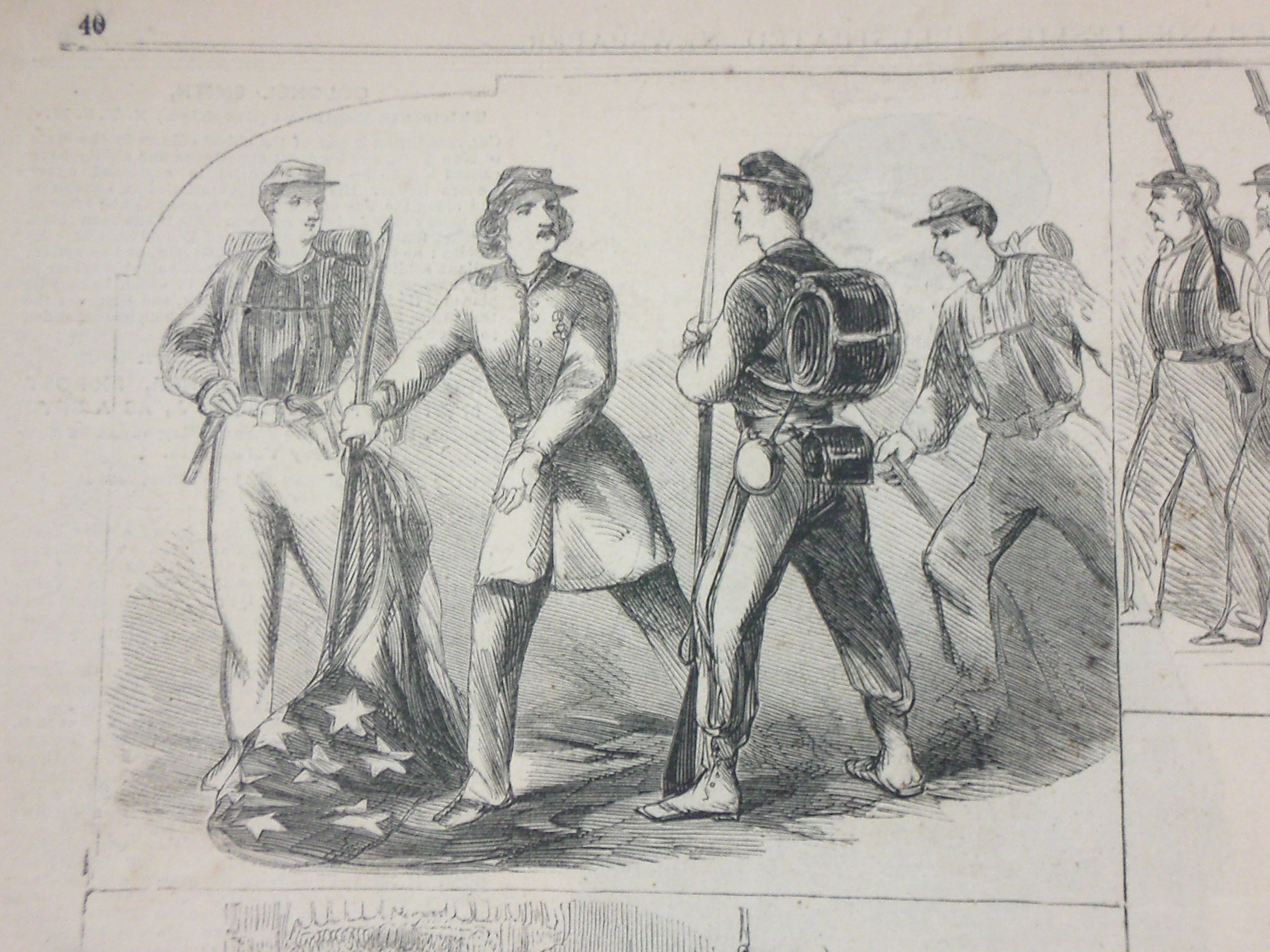 Panel #2: Private Francis Brownell bayonets James Jackson after shooting him. Ellsworth lies on the ground with a fatal wound inflicted by Jackson. 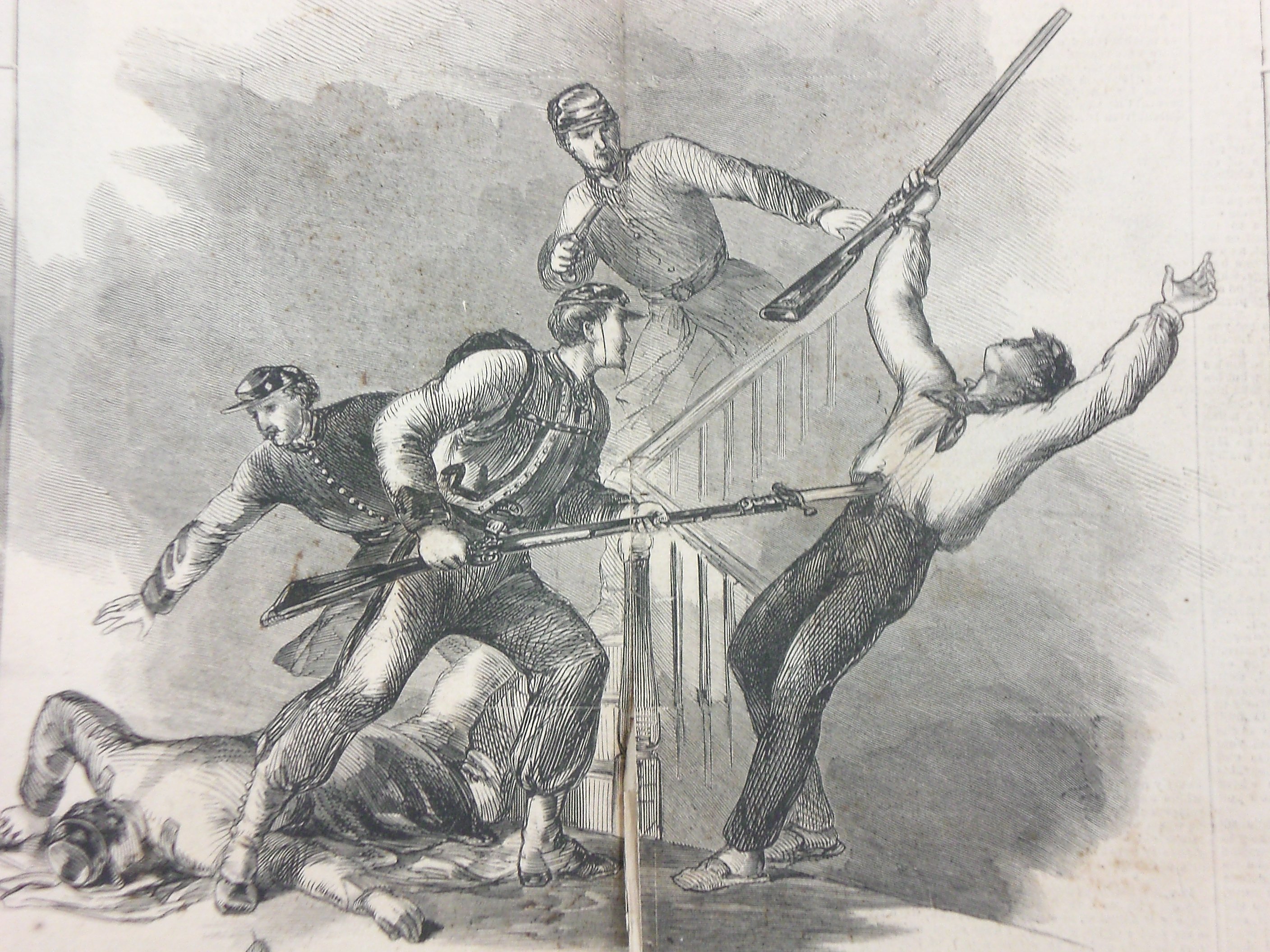 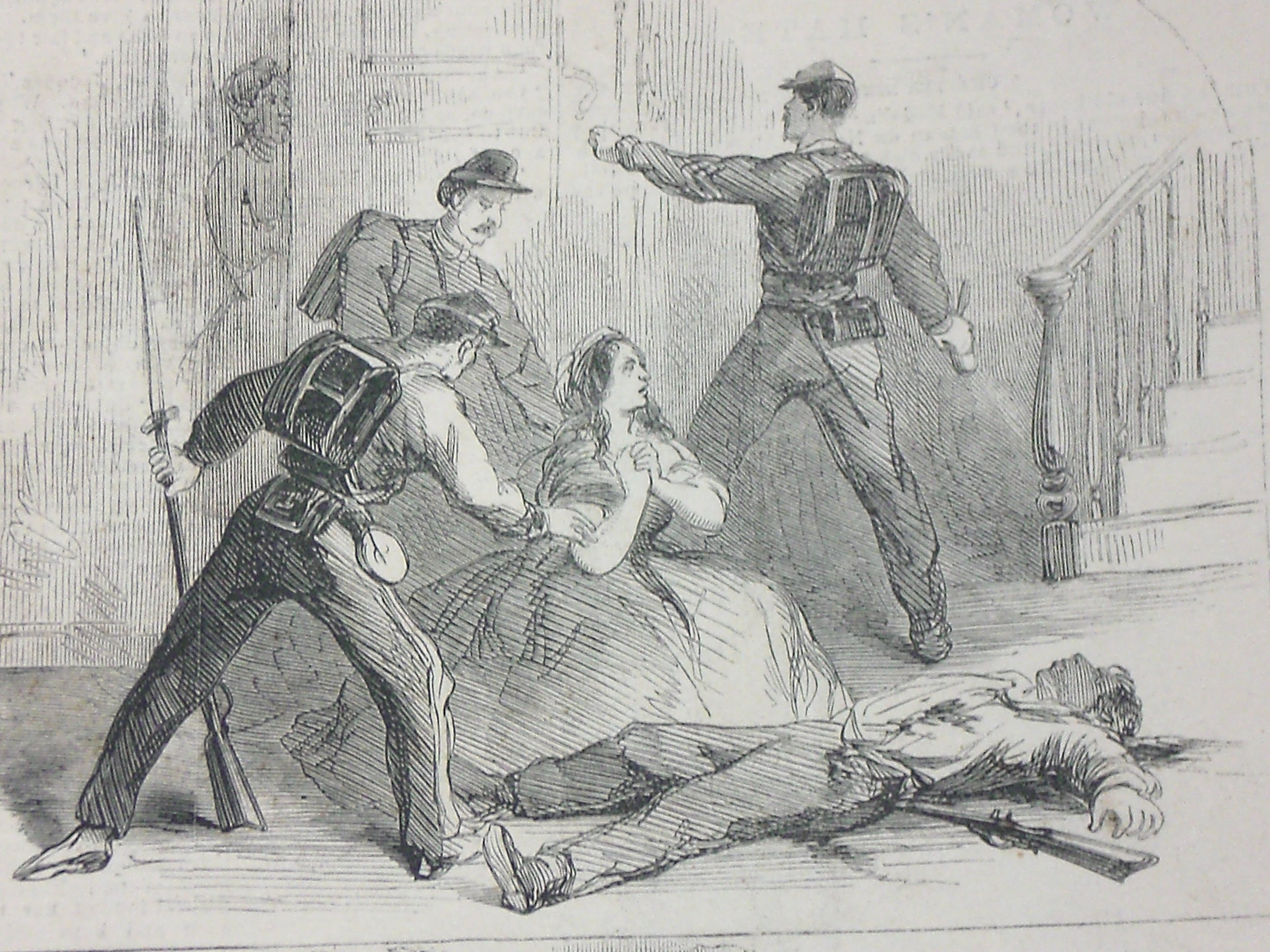 Panel #4: Carrying the body of Ellsworth from Marshall House back to the docks for transportation back to Washington, D.C. 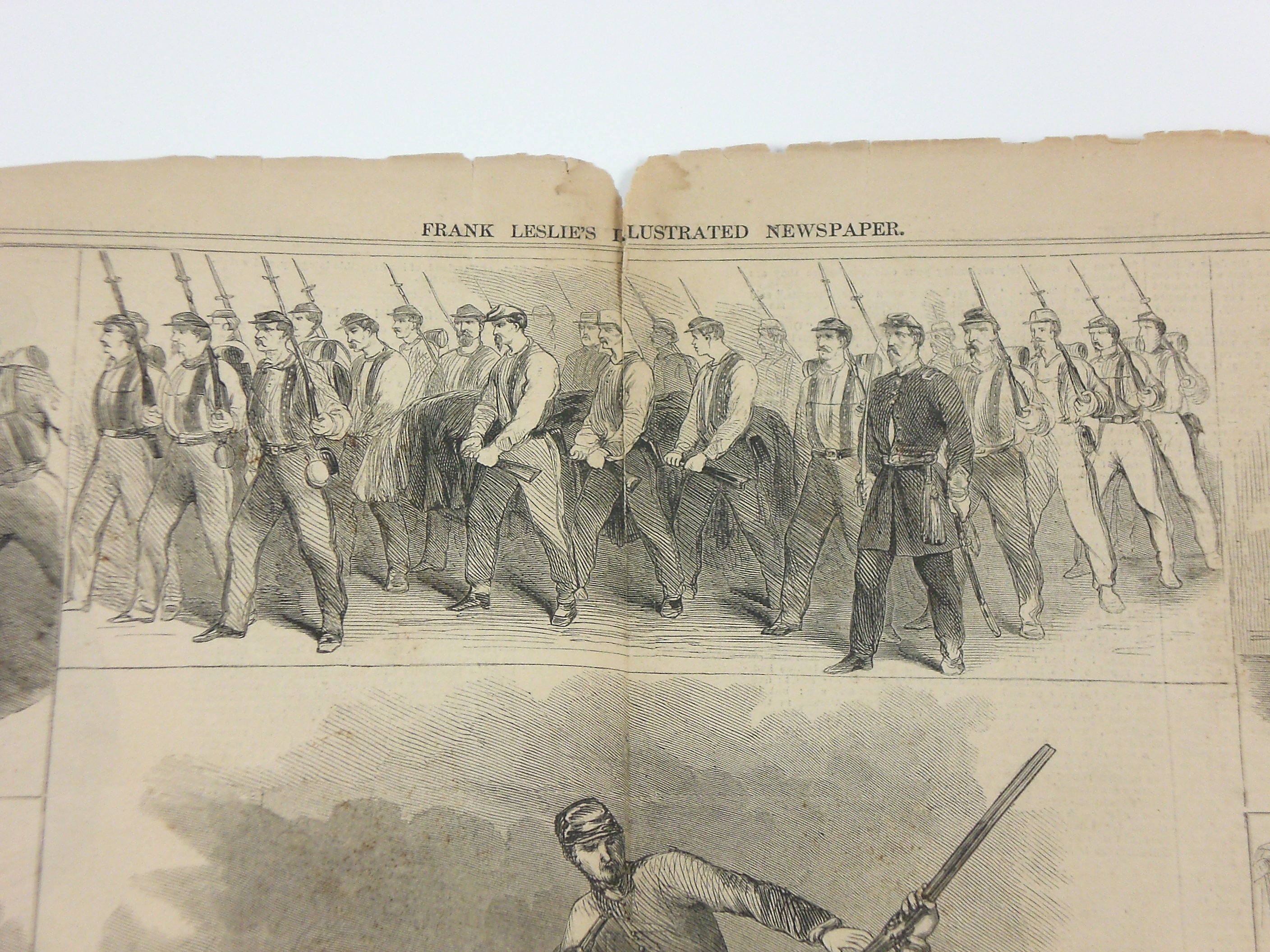 Panel #5: Ellsworth lies in state in the East Room of the White House. 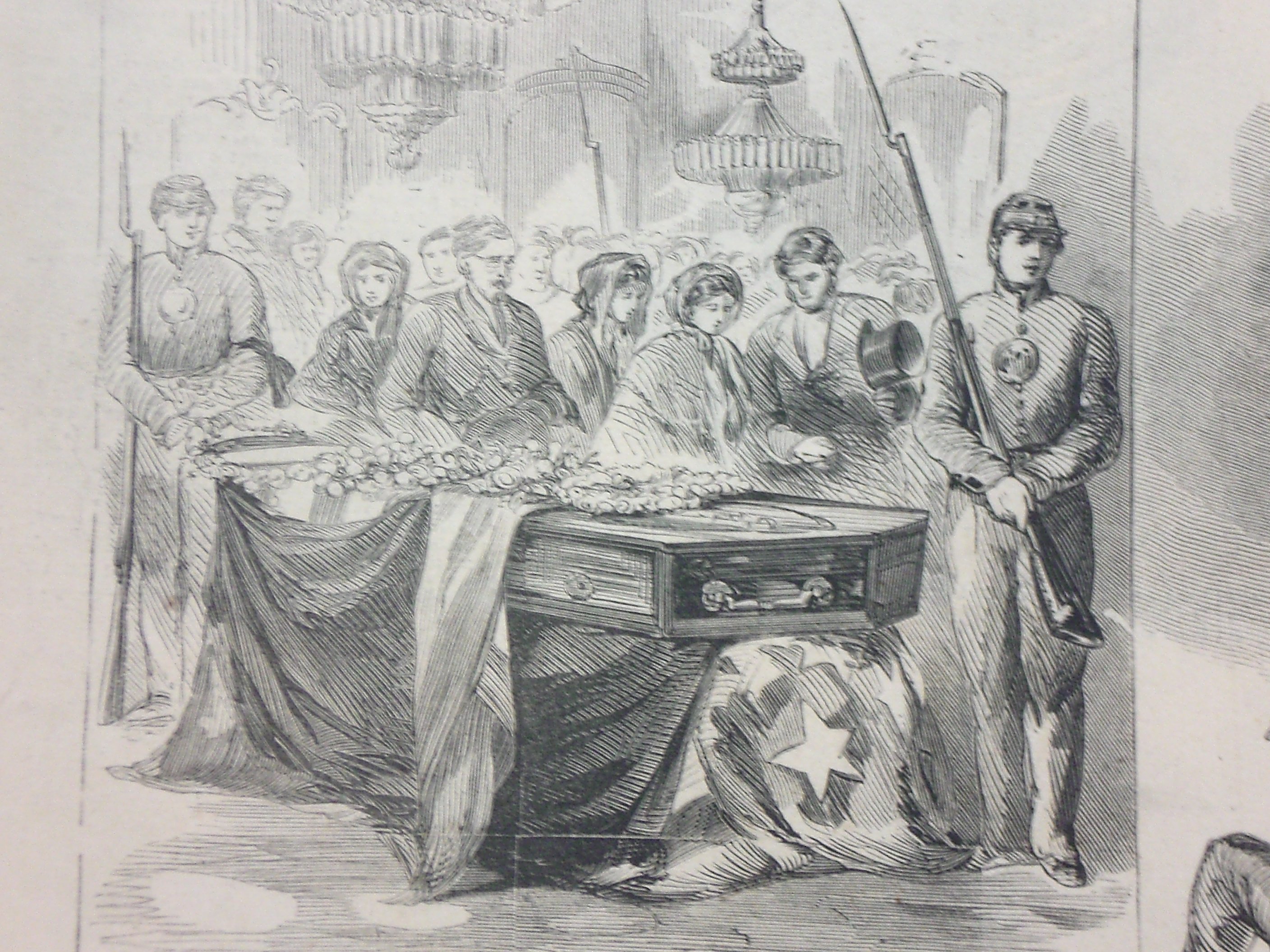 Panel #6: Ellsworth lies in state at the governor's mansion in New York. 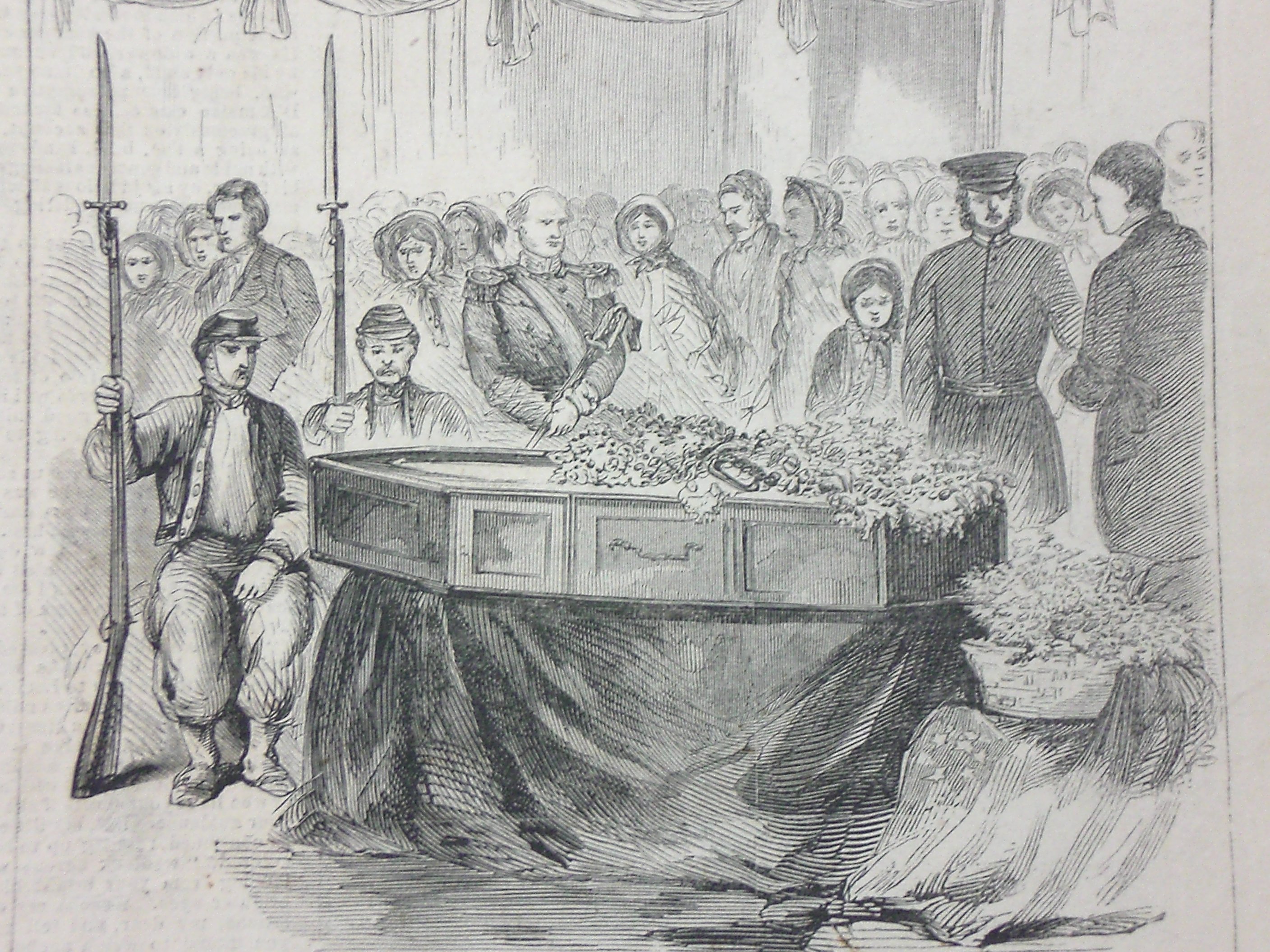 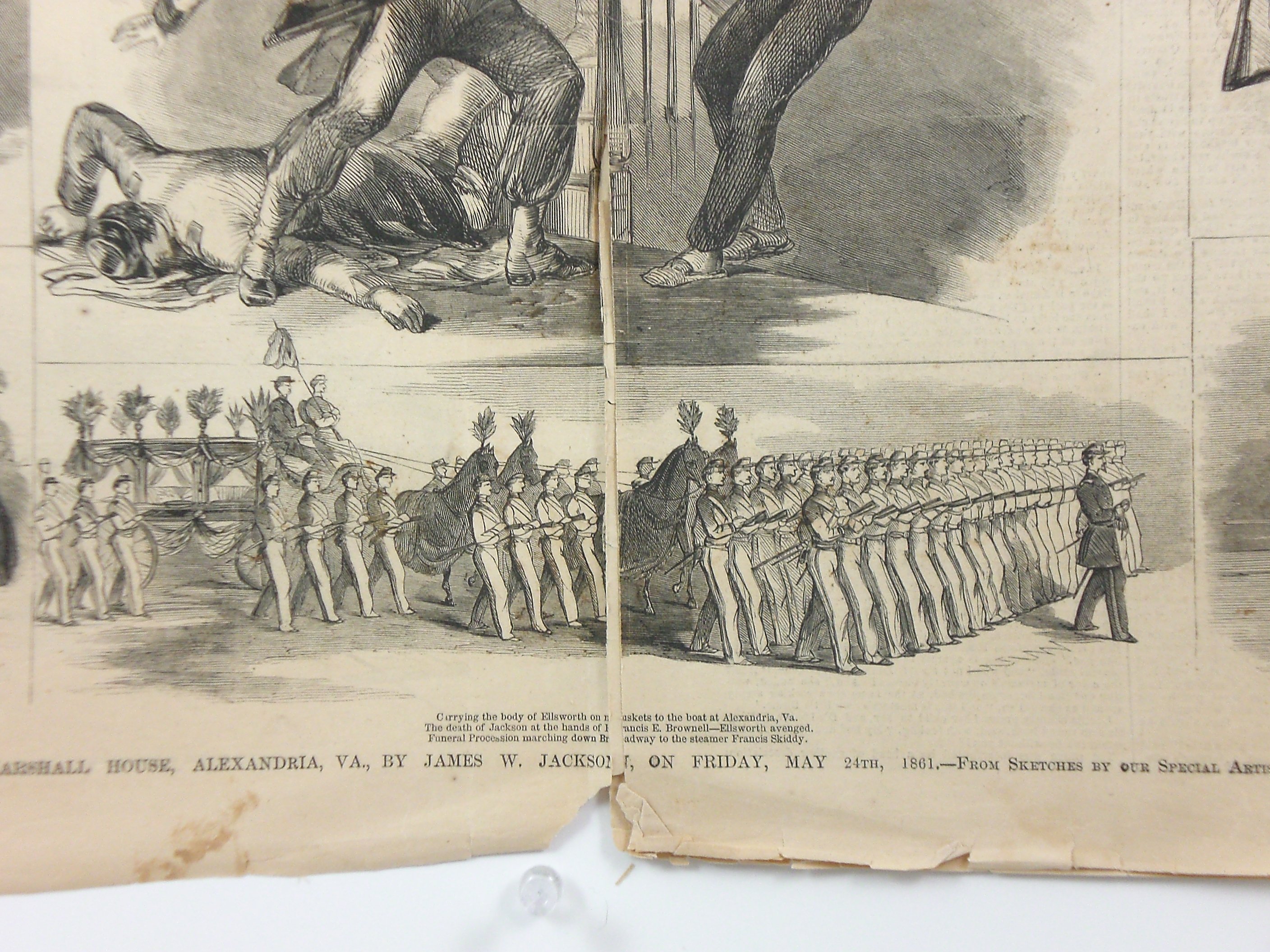 Panel #8: A steamship carries the body of Ellsworth up the Hudson River. 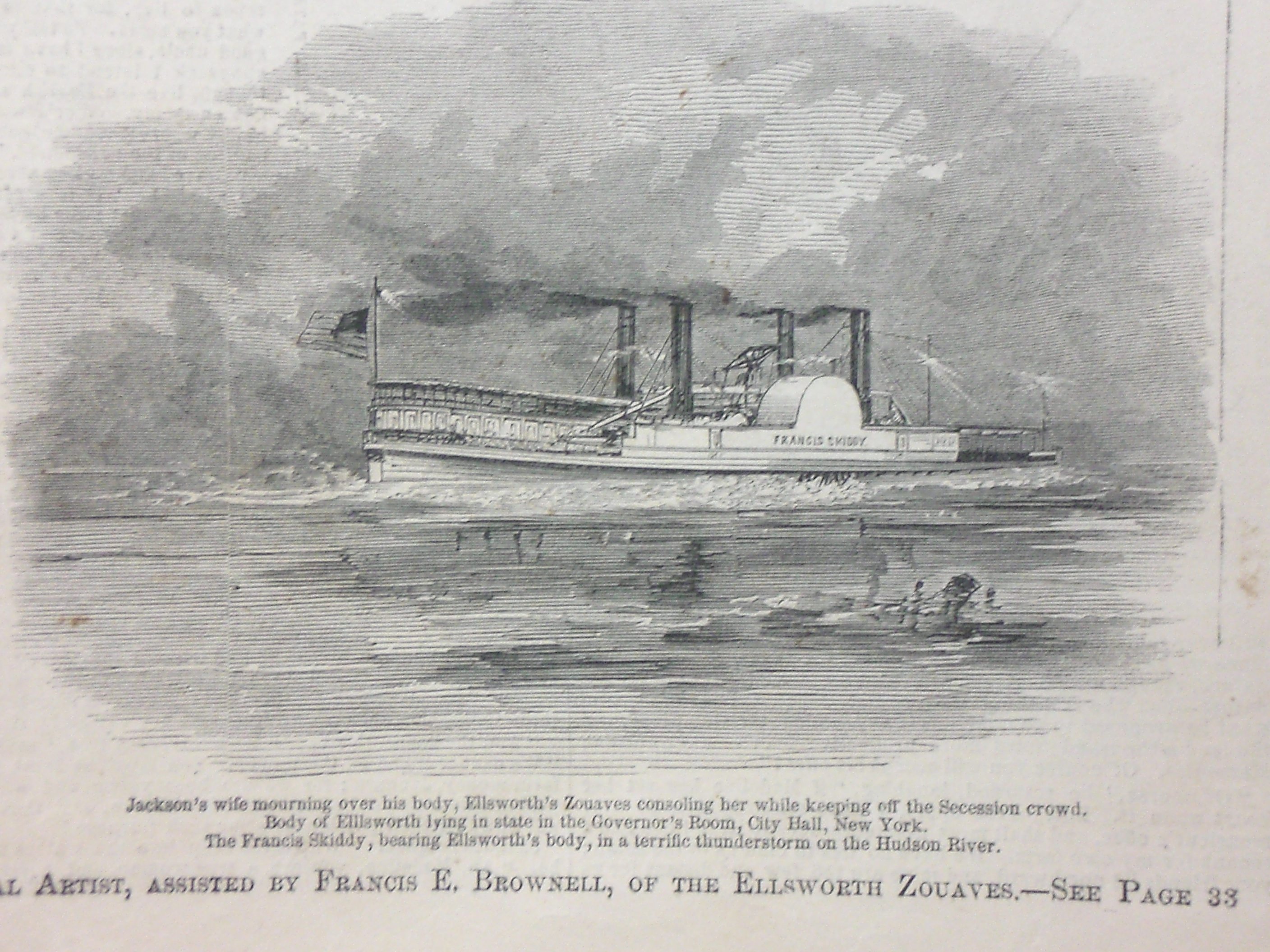 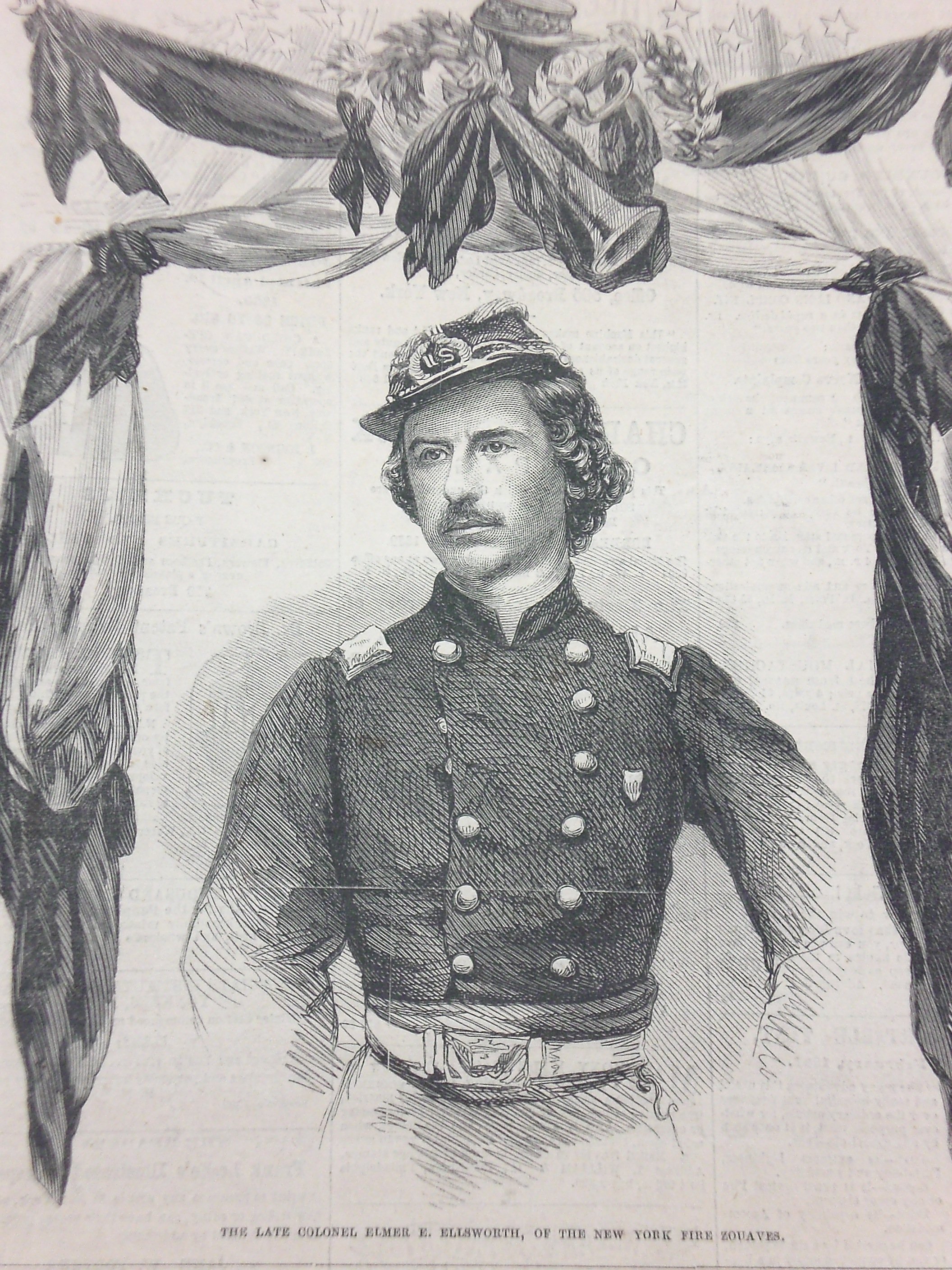 LINK TO PART 1 of this Marshall House series

LINK TO PART 3 of this Marshall House series