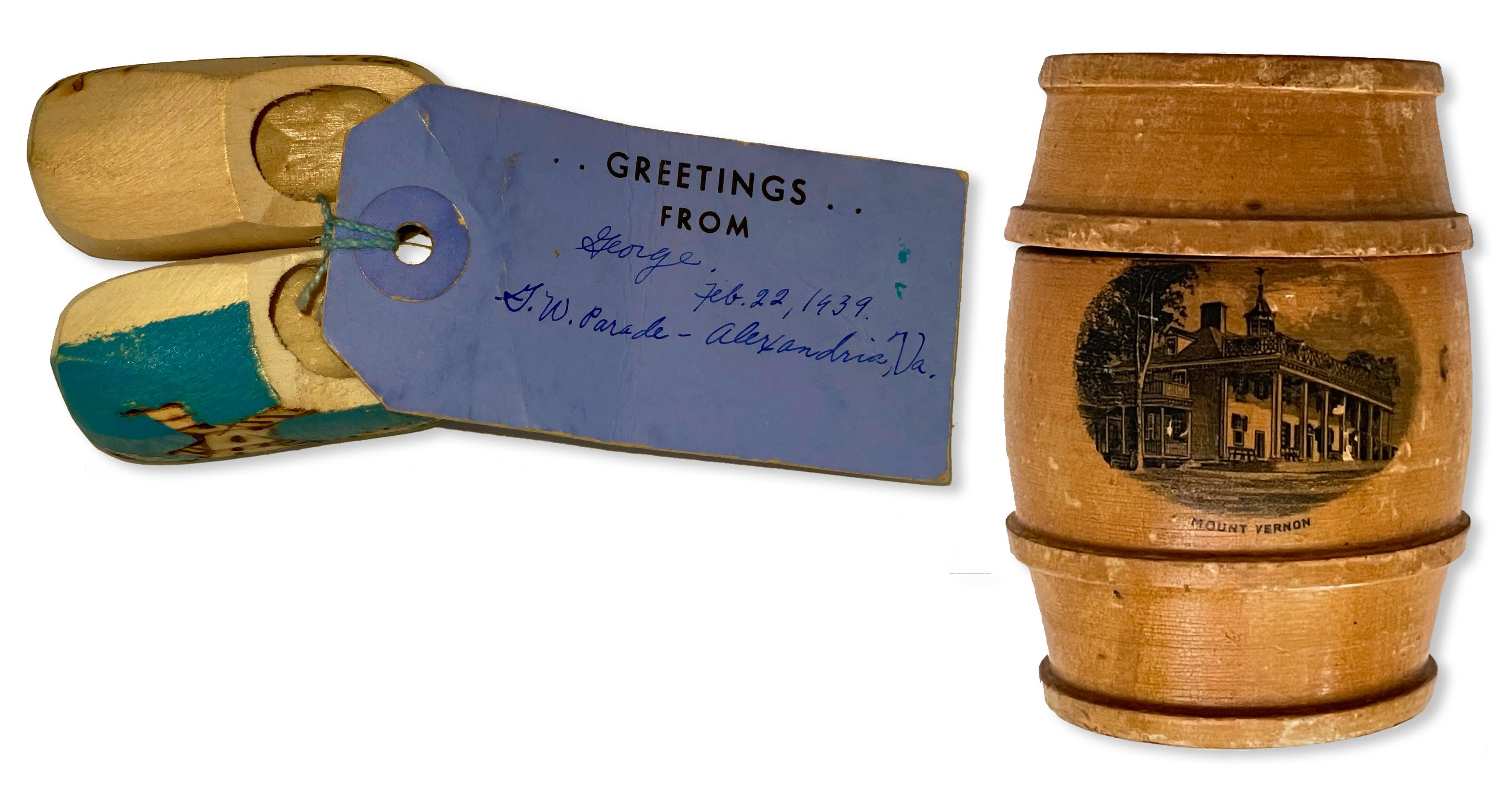 Which of These Two George Washington-Related Items is Older?

I "found" these and many other unopened purchases in the OurHistoryMuseum collection recently. Many had gone undisturbed for years during my health hiccups. Now, that I have mostly recovered, I thought I should get around to opening my mail.

Not only is it the responsible thing to do, it felt symbolically significant — visualize a butterfly opening its wings having gone through its own metamorphosis. Among the newly discovered items, these two objects stood out as intriguing.

The first is a set of souvenir Alexandria, VA clogs likely acquired from the George Washington Birthday Parade that had been mailed to Minnesota. The second is a small barrel-shaped bank from George Washington's Mount Vernon.

I thought it might be fun to play, 'guess which is older?' There are a variety of clues on both items. If you have been a regular reader of this blog, some things should jump out at you.

The clogs are plainly dated 1939. This is an interesting year for the "annual" George Washington Birthday Parade and Alexandria history in general. See the newspaper clipping below describing the parade that year. 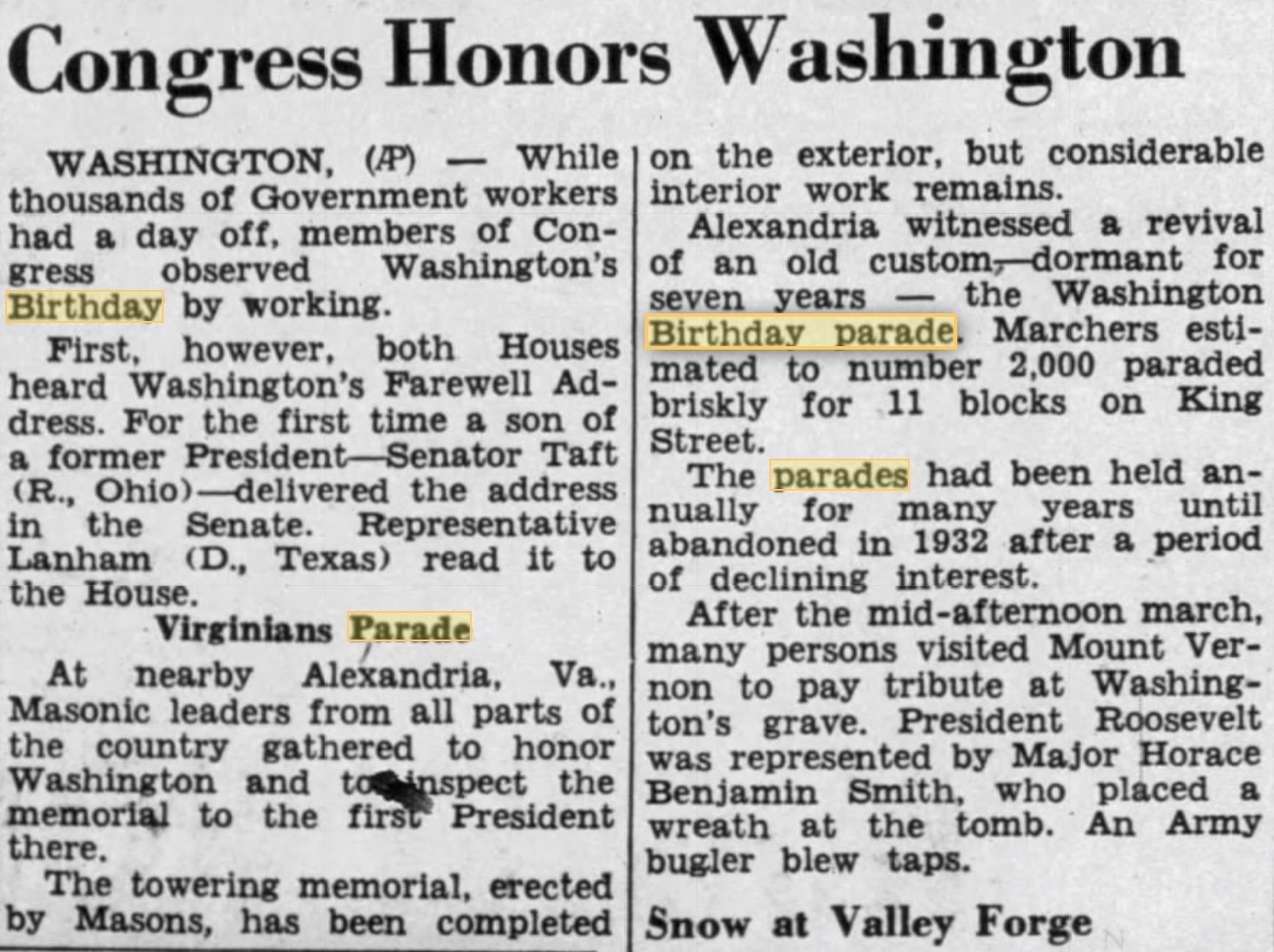 The newspaper clipping notes that the parades had been abandoned in 1932. It also describes how the processions were held on King Street rather than snaking through Old Town as they currently do. 1932 was the 200th George Washington birthday, and we wrote about that in COMPLETE 2/22/1932 Alexandria Gazette GW 200th B-DAY Souvenir Edition. I am surprised that the parade took a seven-year hiatus.

1939 was also a momentous year in Alexandria's civil rights history. The Samuel Tucker library sit-in [PDF] occurred six months later. That event would predate the famous 1960 Greensboro lunch counter sit-in by 21 years. This occurrence paints a picture of what that 1939 parade must've looked and felt like. 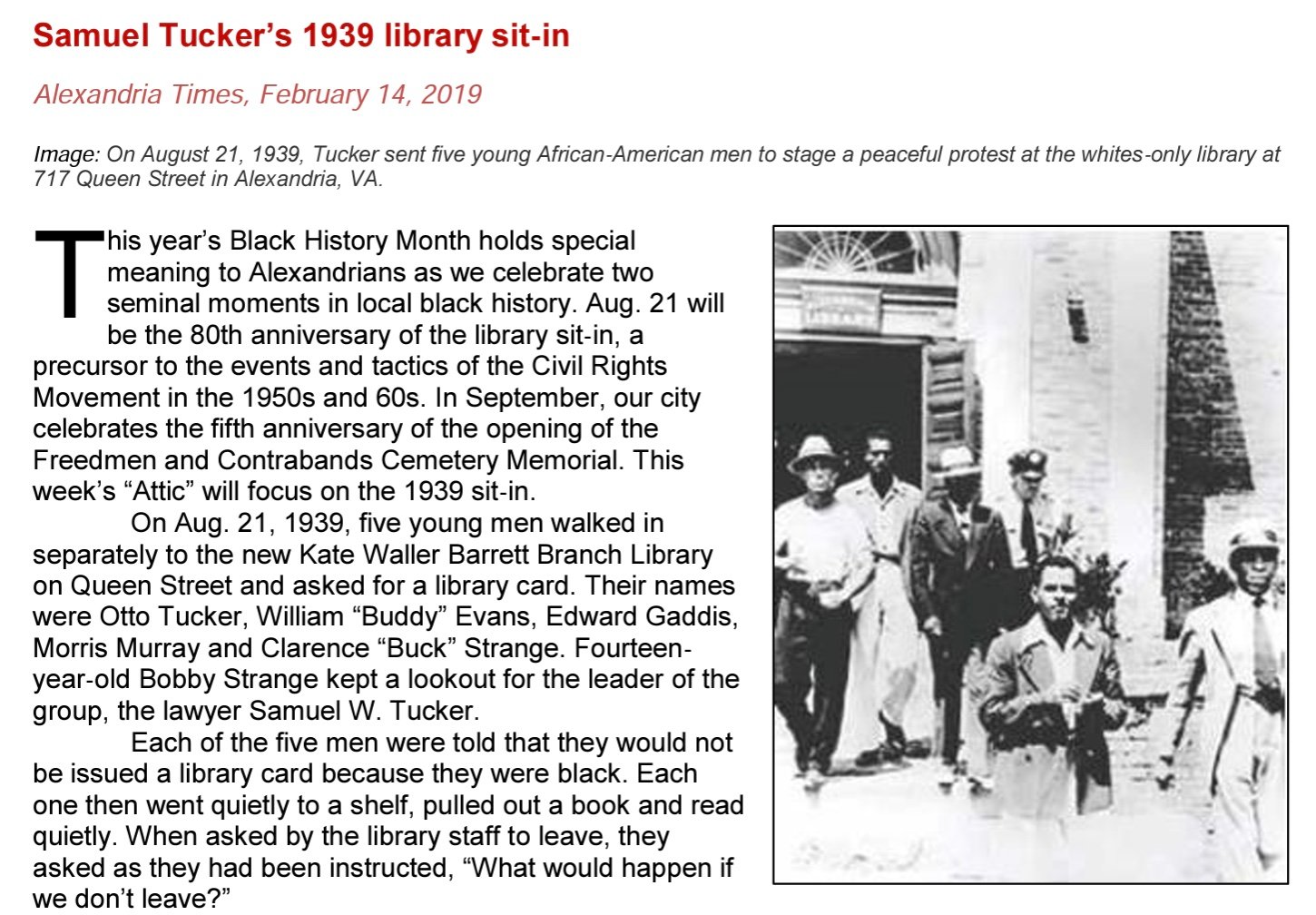 Now let's take a closer look at our items.

The clogs are themselves quite mesmerizing and a little bit bizarre. I'm not sure what windmills or clogs have to do with Alexandria or the George Washington Birthday Parade. Nevertheless, I like them as a souvenir and cannot believe that they made it through the mail. I wonder if they would survive today's mail systems.

Here are a few different angles of the clogs: 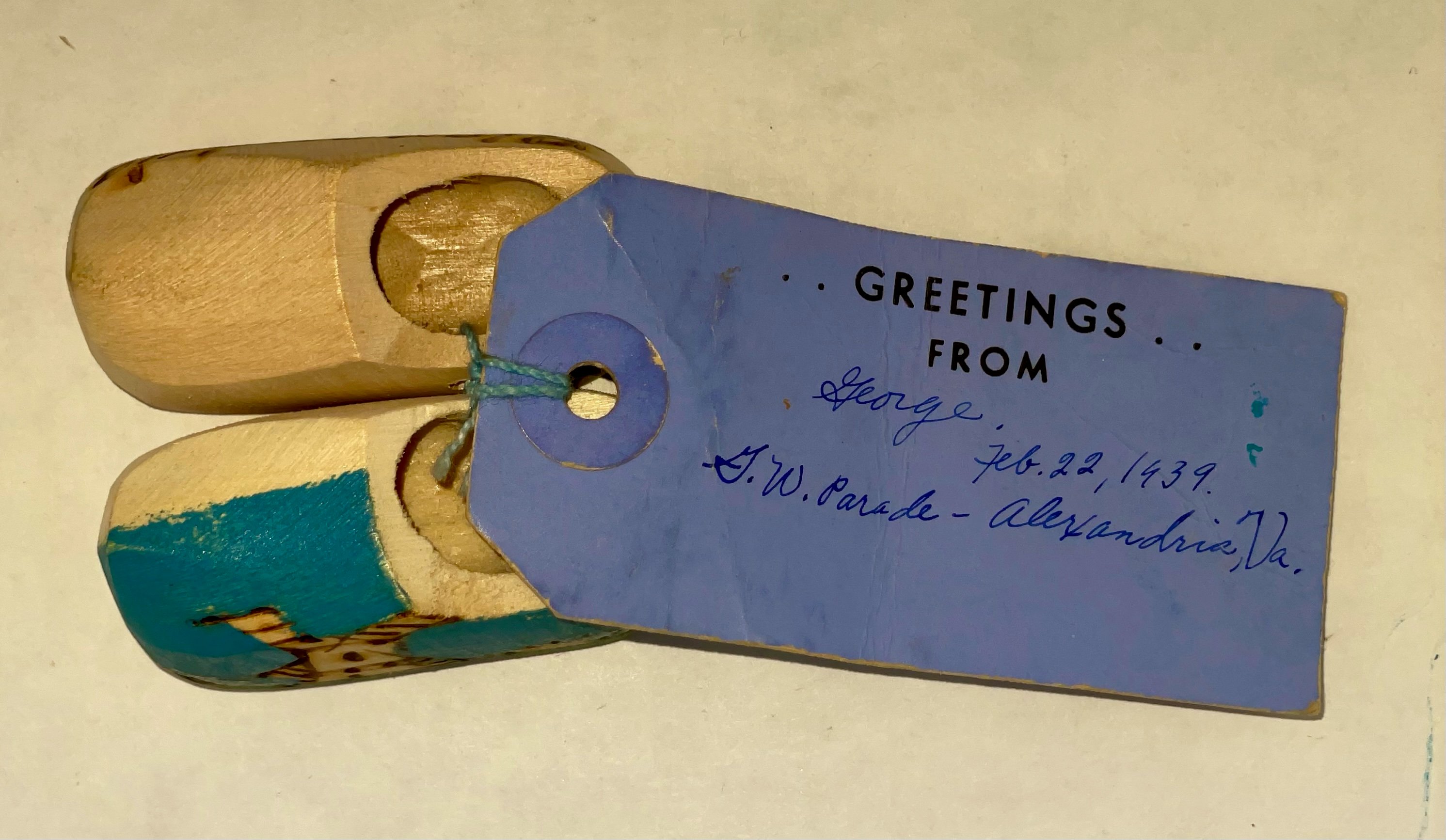 In 1939, George Jr., was ten, and lived with his mother, Melvina, in Washington D.C. They likely traveled the 8 miles to Alexandria specifically for the parade. Melvina mailed the clogs to her mom (or possibly some other friend or family member), Rosie, back home in Minnesota.

Melvina's 18-year-old sister, Evalina Edman, was living with them in 1930.

The Mount Vernon barrel bank measures about 4 inches tall. Other than the image of Mount Vernon, there are no markings on the bank. Let's look at the bank in more detail. 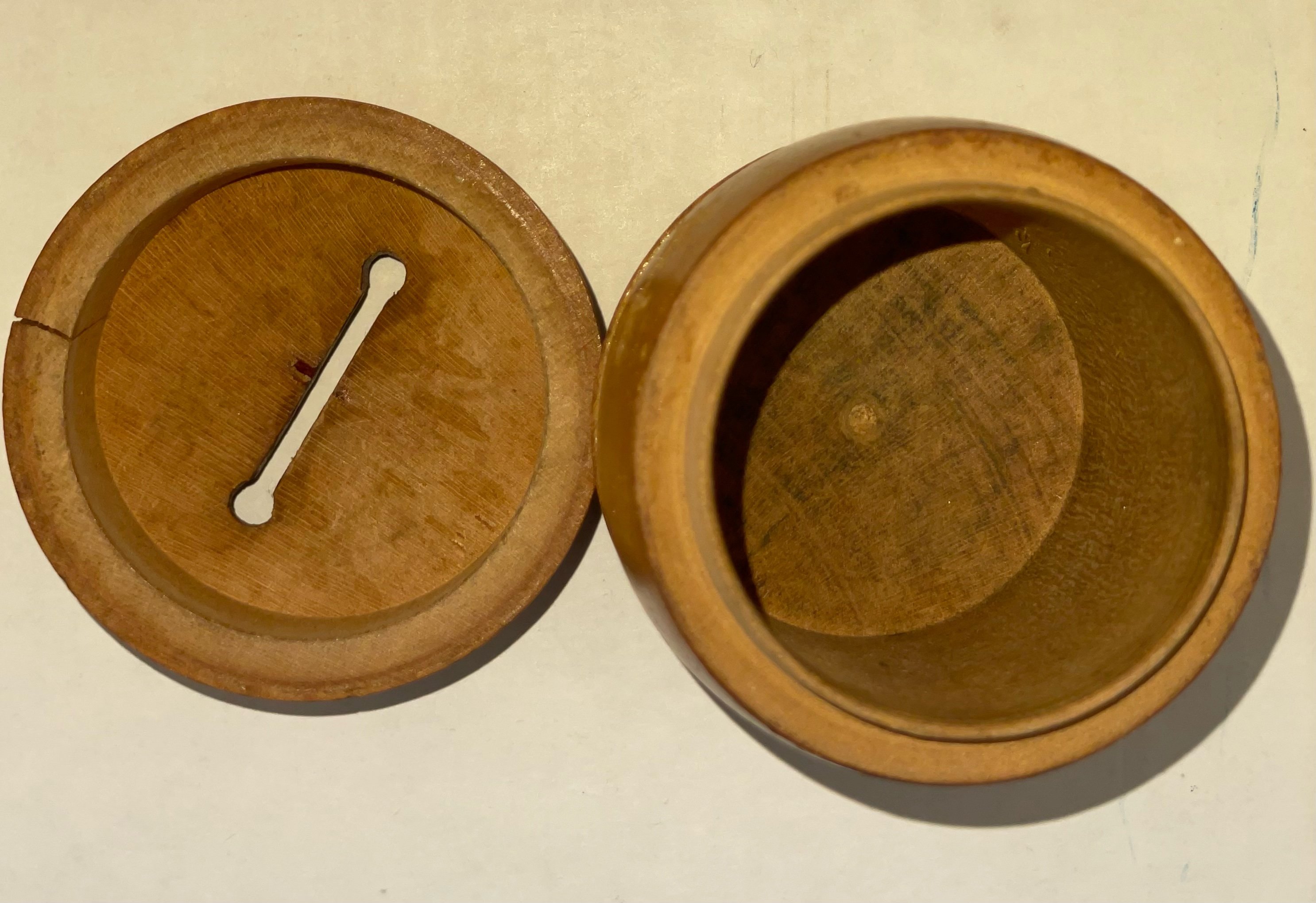 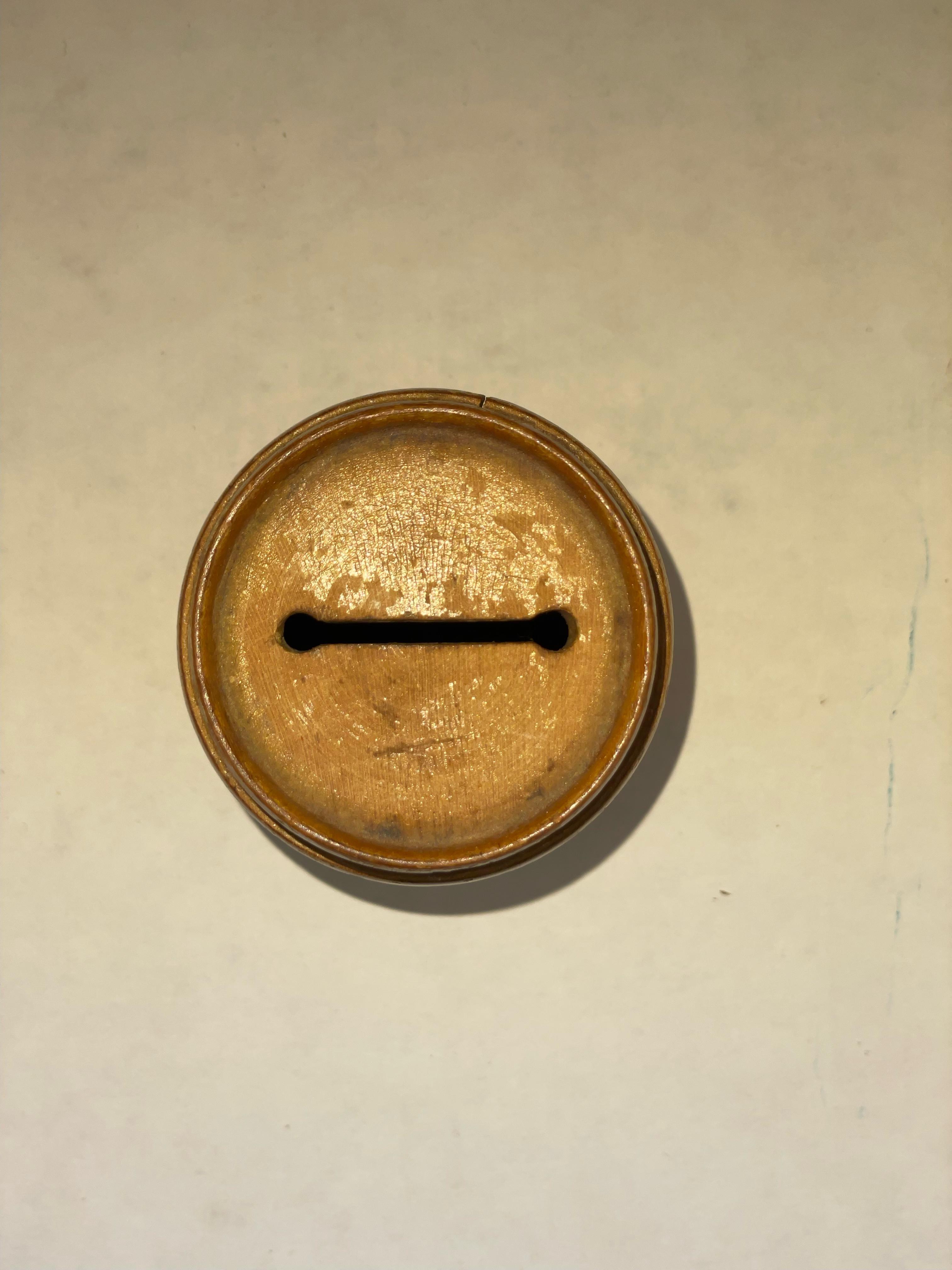 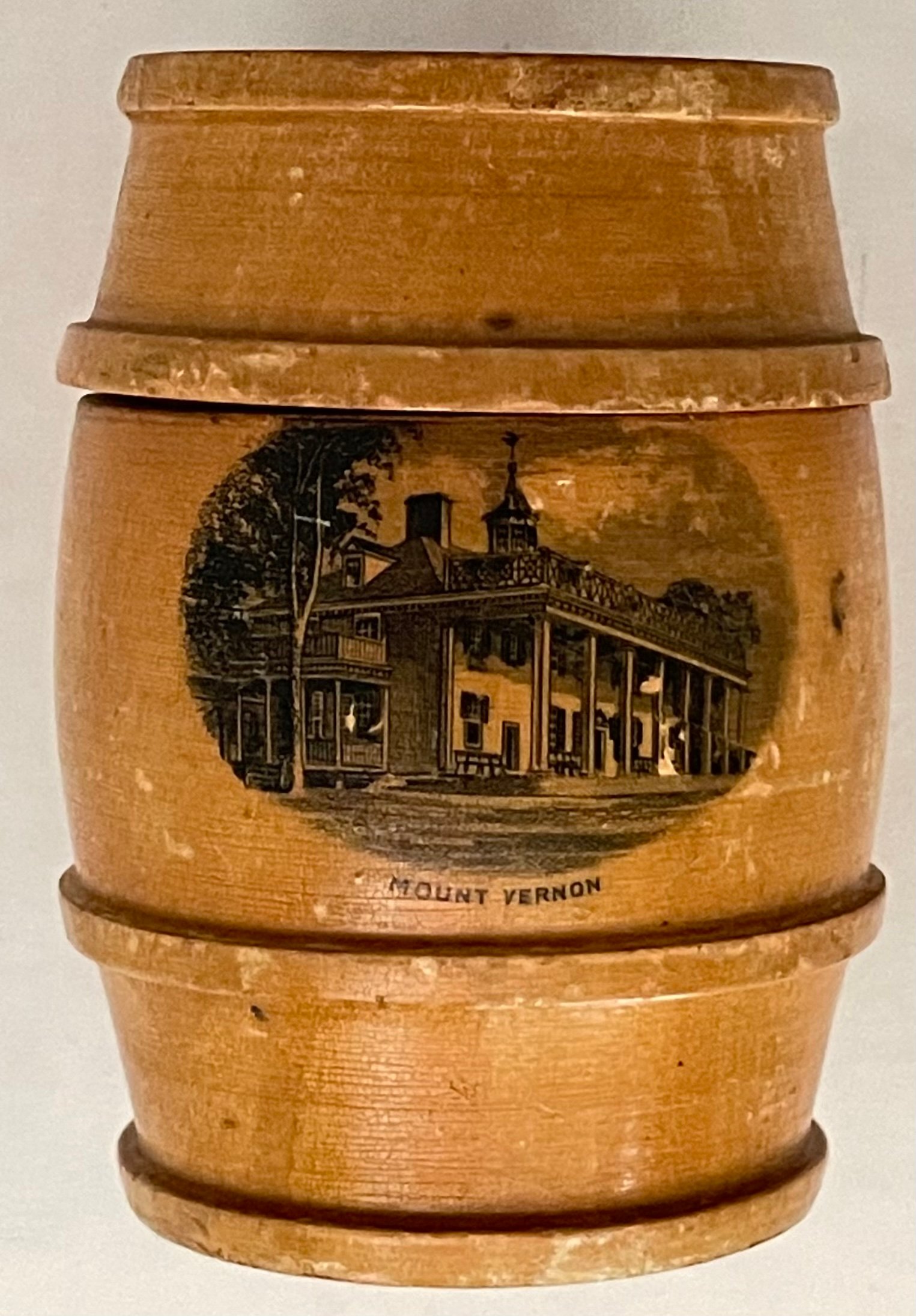 We can refer back to a previous article to find some clues. In Dating a Mount Vernon Postcard Booklet is a Delightful Mystery Journey, I provide a reasonable timeline of the 2oth century changes to the building and nearby trees. I will reproduce the relevant parts below.

The balustrade (the lattice around the roof's edge) was removed in 1936. There's a picture of its removal (see immediately below). Over the years, Mount Vernon has decided to restore the mansion's appearance to the time of George Washington as much as possible. So, now we know the bank is probably older than 1936. 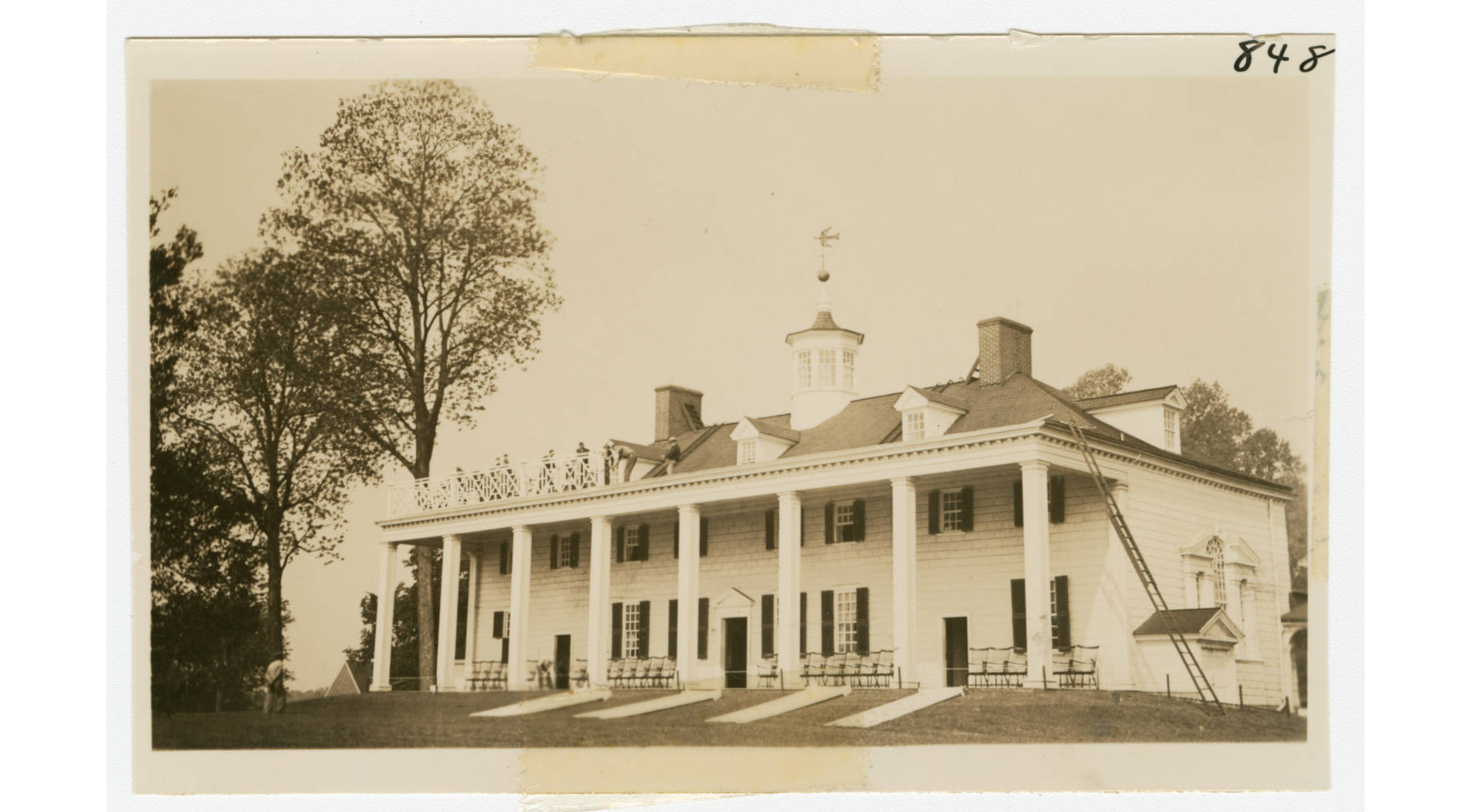 Let's track the presence or lack thereof of the Y-shaped tree off the nearby (south) porch. It's pictured on the bank.

Here is a 1910-confirmed photo. Note that the south porch, as well as the balustrade, are still present. Since both are depicted on the bank, we can probably guess our bank is older than 1910. 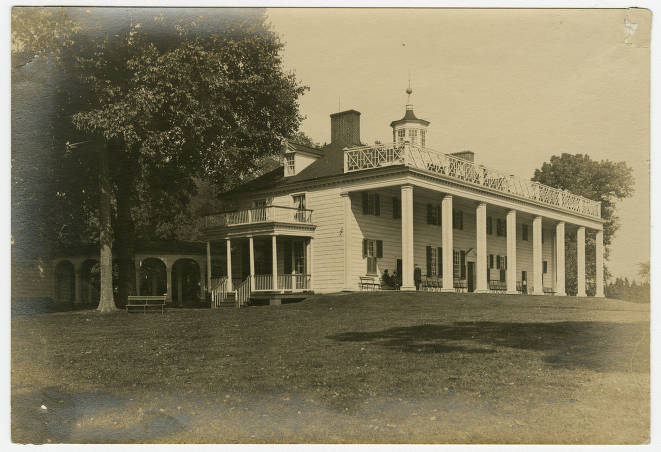 But the tree just off the porch is missing. It is not in the photo, but it is on the bank. The tree died in about 1906 and was taken down in about 1908. 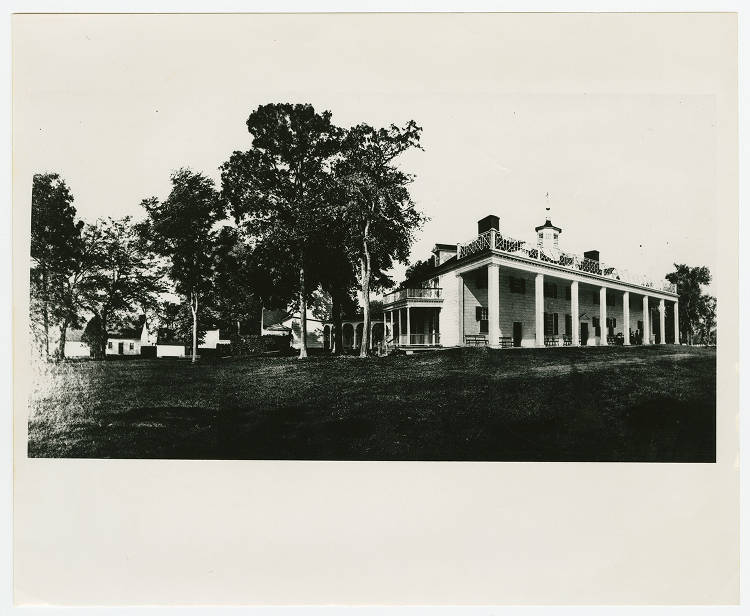 There's this image from the 1850s below. We know the home had not been acquired by the Mount Vernon Ladies Association and opened to the public in 1860. 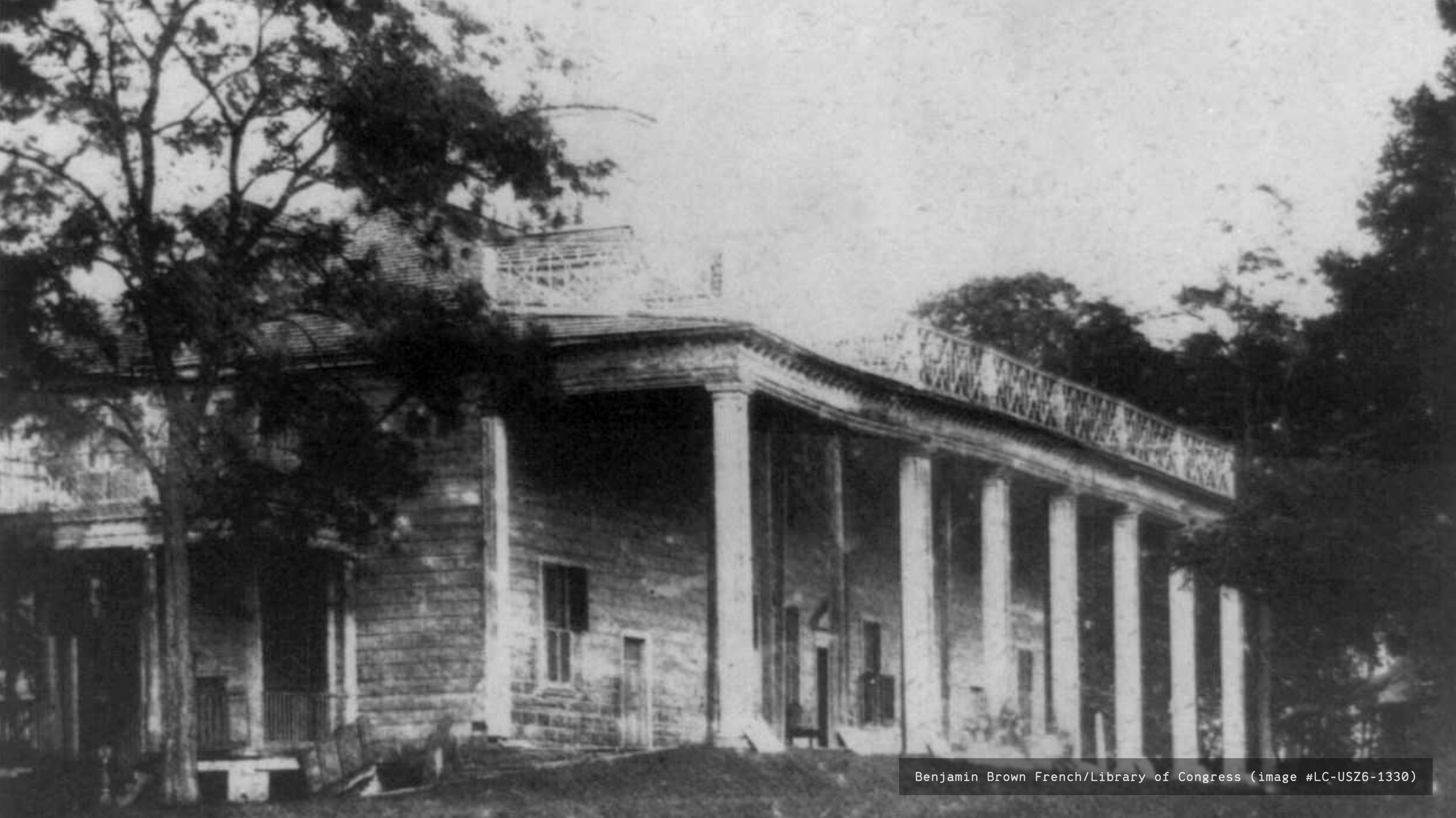 Steamships started carrying passengers from Washington, D.C. and Alexandria to Mount Vernon in 1878. Later in 1892, an electric railway opened, which was eventually replaced by the current George Washington Parkway in 1932.

We can thus surmise that sometime between 1878 and 1905, a souvenir shop opened at Mount Vernon and sold this barrel-shaped bank. The bank is the oldest of the two items evaluated here by roughly 35 years.