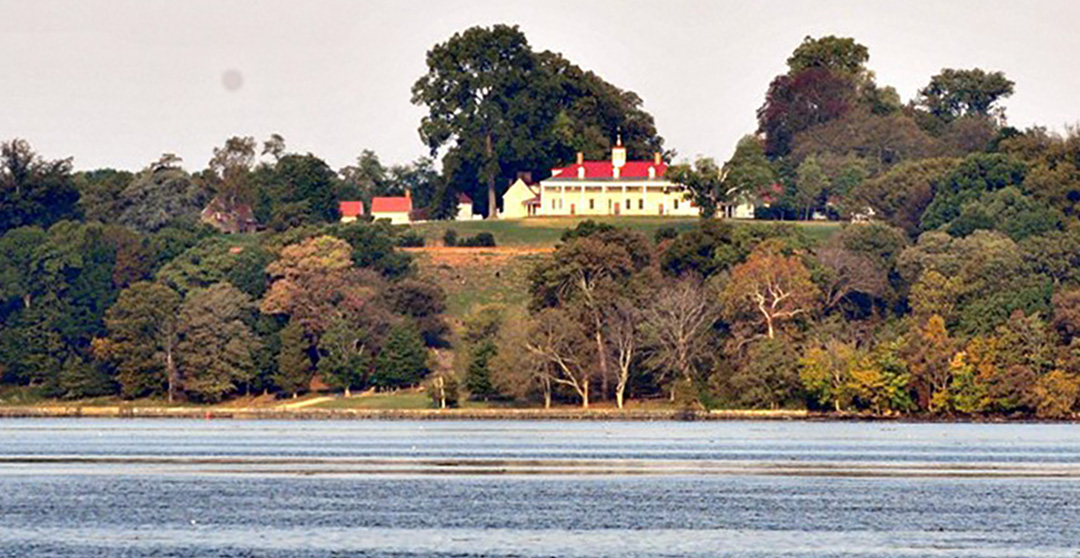 I frequently write about George Washington, especially as we get closer to his February 22nd birthday. Articles like those listed below have hopefully contributed to the dialogue and understanding about Washington.

Today, I am sharing a never-before-seen 1803 letter that, incredibly, features a poem inspired by the sight of Mount Vernon from the water. A 20-year-old Chester, New Hampshire man, writes to his mother, describing his 15-day journey from Boston to Alexandria, Virginia, by sea. He tells of his homesickness, and he seems to be explaining ex post facto his reasons for leaving. His father, Benjamin, passed away just six months prior, although he doesn't mention that.

The main image of this article is similar to the view that William B. Melvin had when he sailed by Mount Vernon. The principal differences between then and now are the height of the trees and the fact that the estate is not under cultivation. George Washington planted the now tall trees in the front of the estate in the late 1700s. A map of Washington's farms showing orchards and the clover fields mentioned by the author, plus his poem, are below. 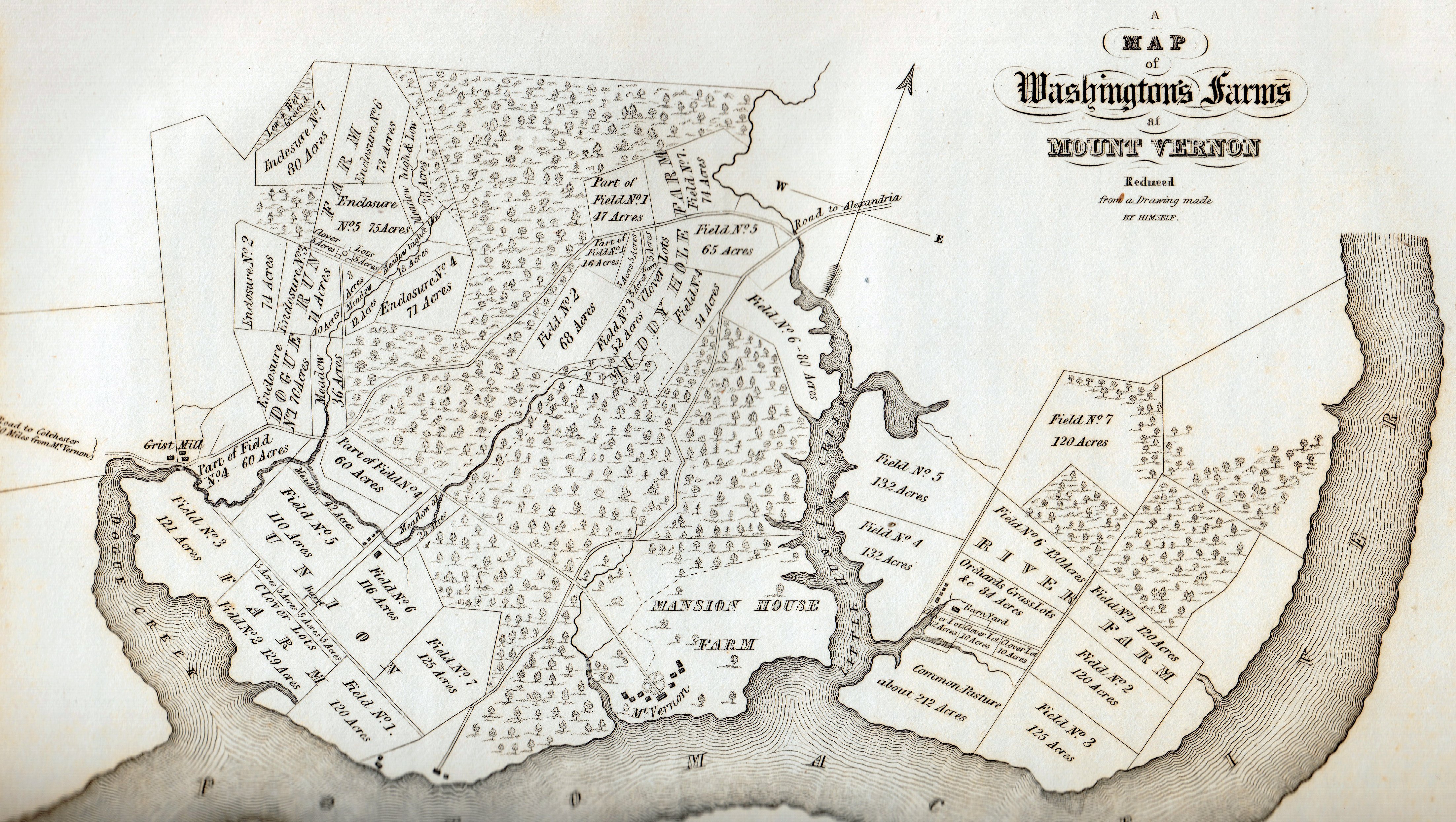 William B. Melvin's untitled poem inspired by his looking at Mount Vernon from the Potomac River just four years after Washington death:

Americans when you pass by
You can't but cast an eye
To behold his house so neat
And his farm yet more complete
But alas his soul has fled
To the regions of the dead
There to rest in heaven above
Where he'll receive peace, joy, and love

When he moved to Alexandria, Virginia, the population was less than 5,000. William Bradley Melvin ultimately married and fathered nine children. He served in the War of 1812, moved from Virginia to Mississippi, became a Justice of the Peace (akin to a sheriff), and died at 51.

Here is an 1874 view of Mount Vernon discussed in a previous article. 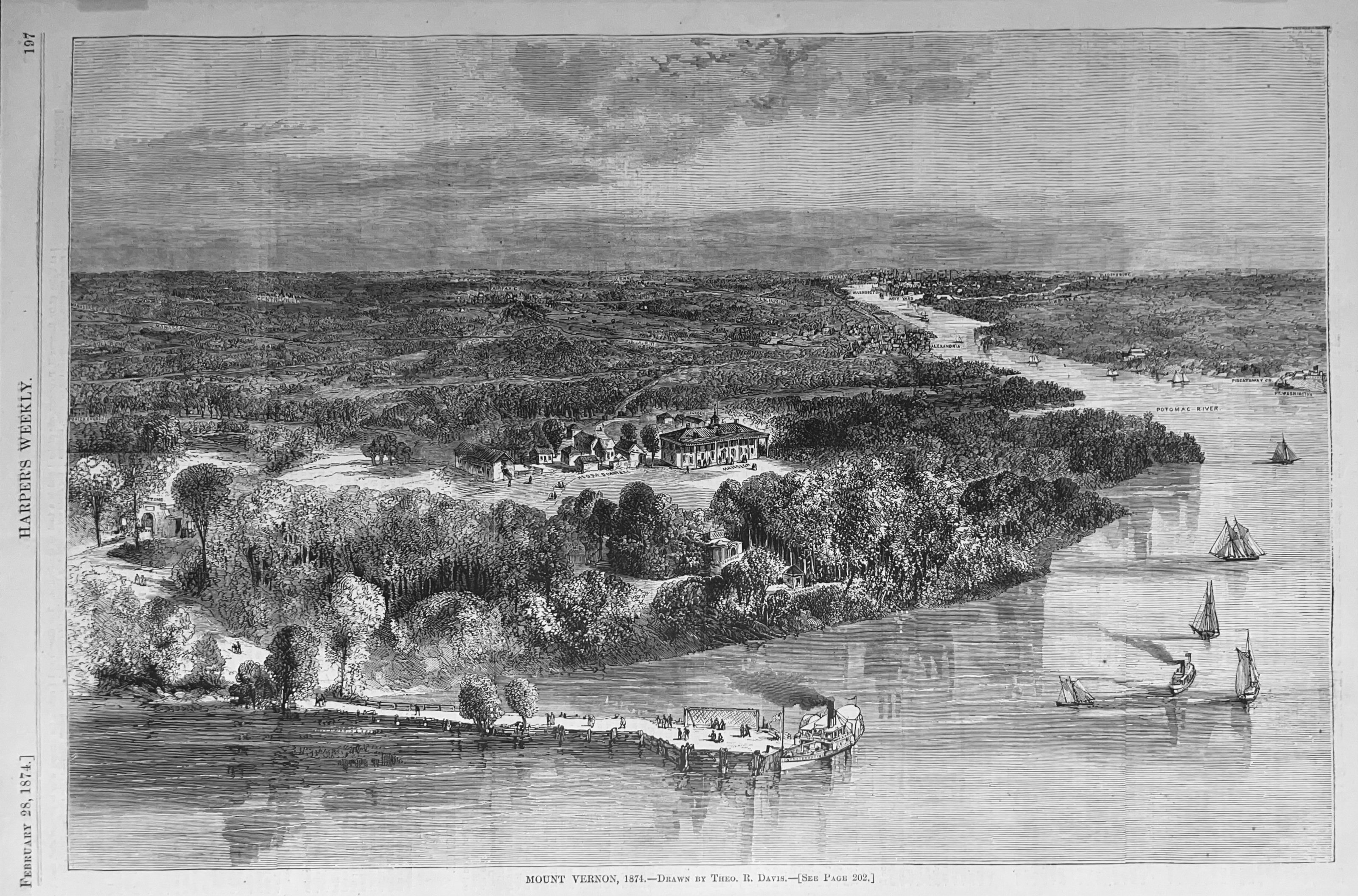 His letter is transcribed and shown below. Other noteworthy features of the letter are how he talks about Alexandrians ("compliant & obliging") and how he requested letters be directed to him in the District of Columbia after crossing out the state of Virginia. Alexandria had been annexed by Washington DC from Virginia just a few years earlier.

I did find Benjamin Melvin's (father) grave and an overview family tree from ancestry.com, as shown below. 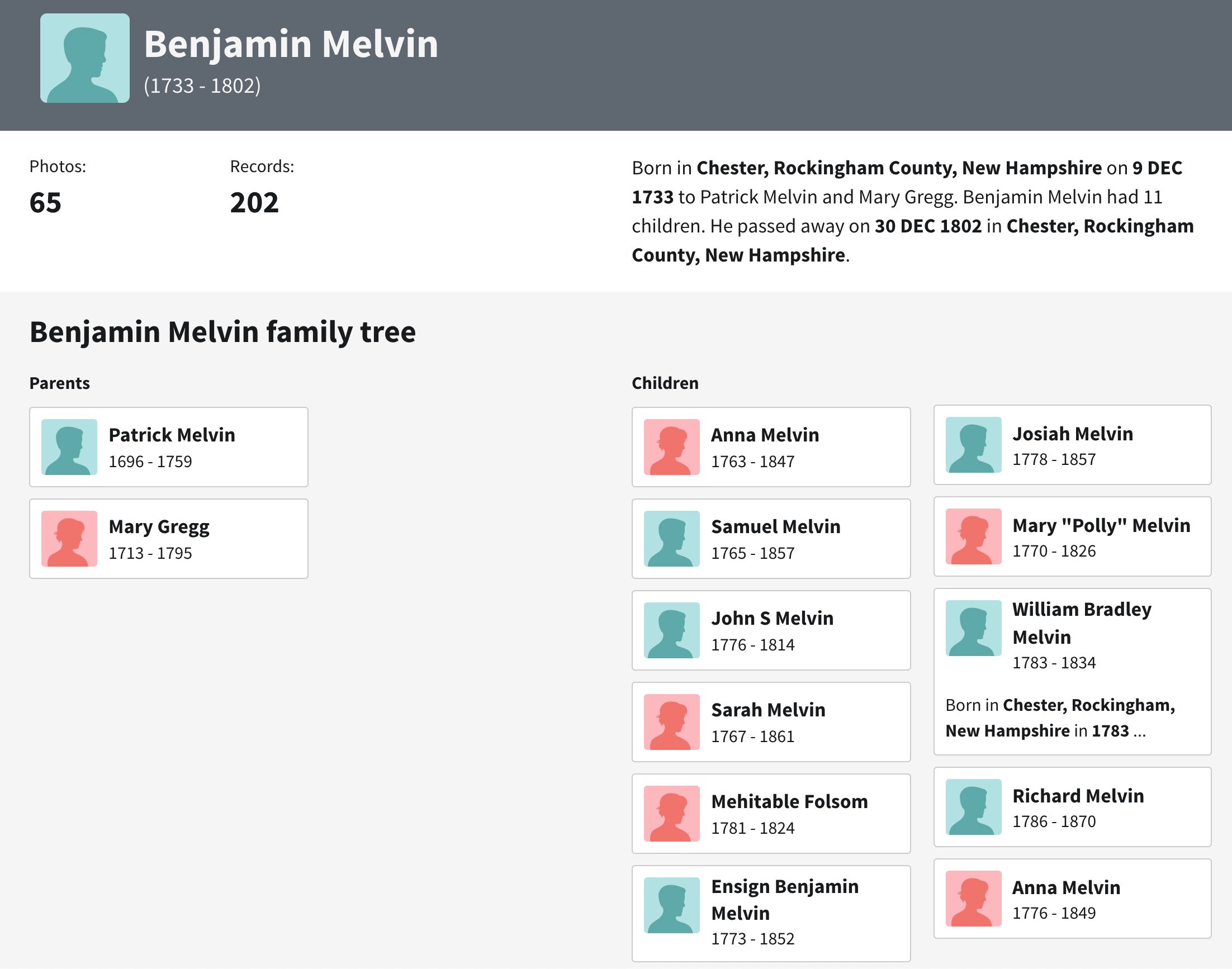 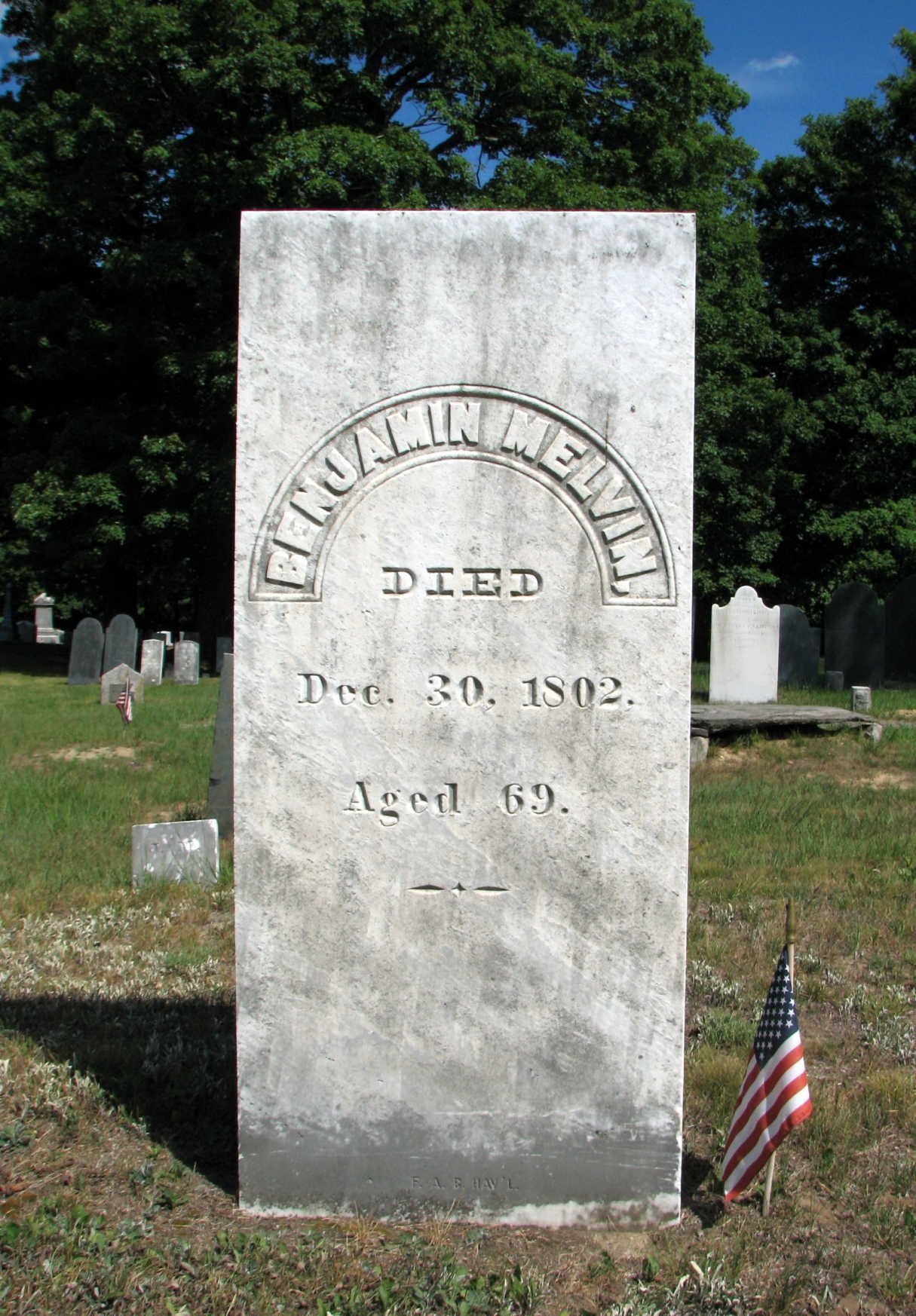 Some newspaper clippings provide insight into William B. Melvin's life after moving to Mississippi, becoming the Justice of the Peace of Adams County, and a plantation owner. 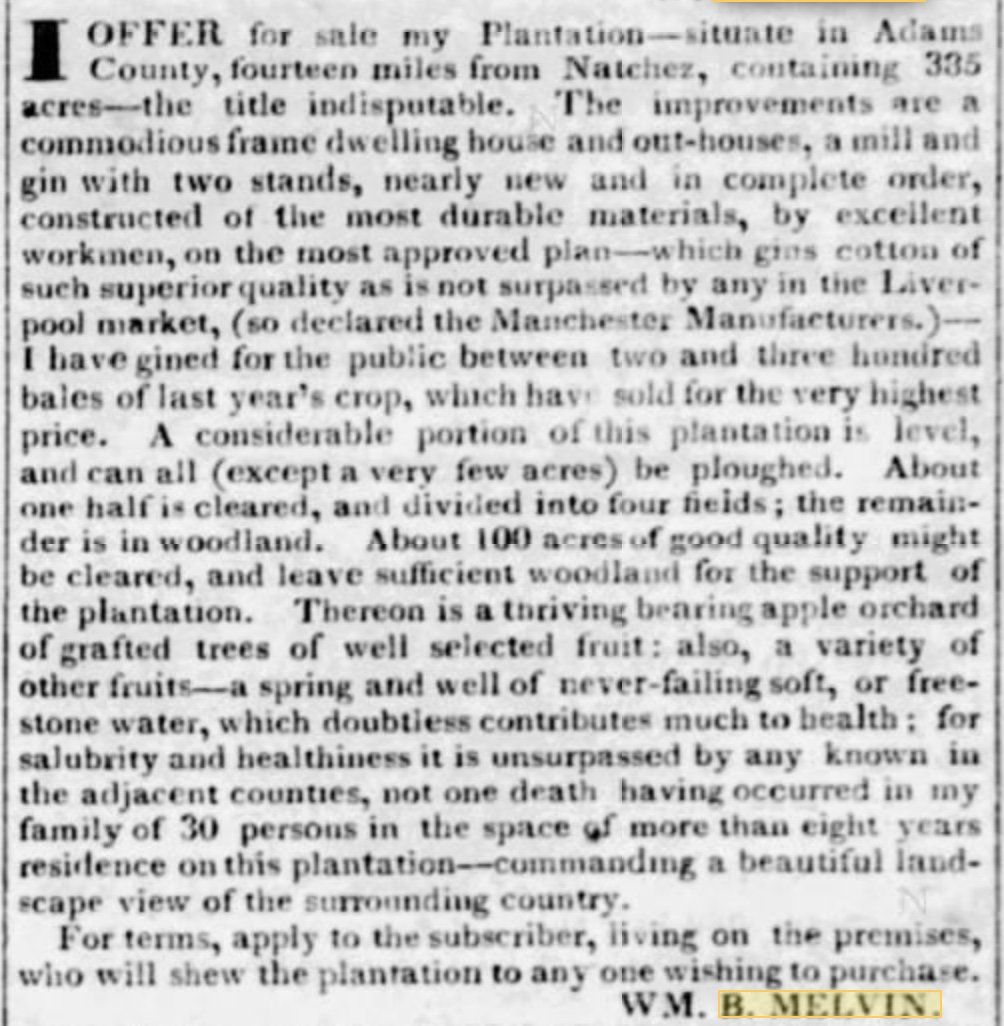 The death of his daughter sounds particularly heartbreaking. 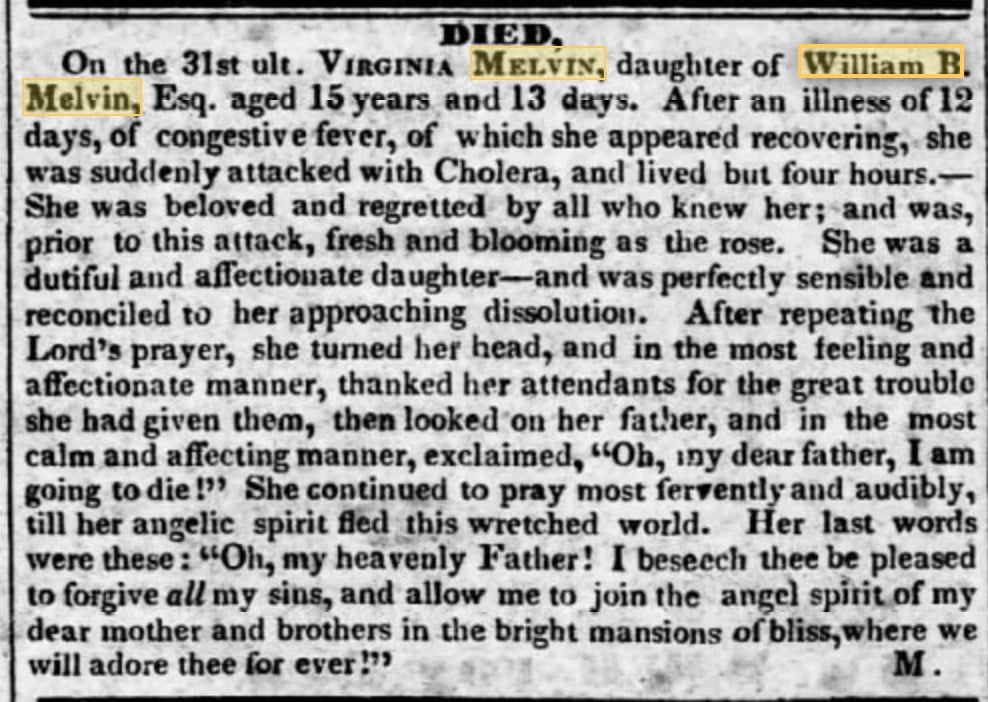 It seems those early views of Mount Vernon stuck with William and would inspire him to become a plantation owner himself. William B. Melvin's original letter to his mom, Mary Gregg Melvin, is shown below.

Paragraphs and punctuation are added to enhance clarity and understanding.

'Tis with pleasure I now have an opportunity to inform you of our safe arrival. Our passage from Portland to Boston was only two days, we tarried two days in Boston. We then set sail for Alexandria.

Our passage from Boston to Alexandria was 15 days. We had a very wet time indeed. We had one man accidentally have overboard. He was absent half an hour but by our utmost exertion, we caught him. He was an excellent swimmer or he would have perished. I was very much rejoiced to think was not me for I must have perished in half the time he was in the water. If it had been my lot to have been overboard no more.

Dear mama should I have the pleasure of seeing and conversing with you and my dear brothers and sisters. I caught a very bad cold when I was on board but I am now much better. When we sail up the river Potomac we went on shore in Maryland with the Captain and took tea at his mother's house. We were entertained in the most excellent manner. The captain's mother's house about 800 acres of land all under cultivation and in Virginia and Maryland is not called a great fortune.

As we sailed farther on the Potomac on one side were the trees in full bloom and on the other side was the thrifty wheat which was beautiful and on both sides were clover grass some we measured 12 inches high. All these together offered the most beautiful prospect I ever saw. Just before we came inside of Alexandria we have in view our late General Washington's seat. This most noble patriot's house was not so magnificent as some wood suppose but it was decent. All around his house were rows of beautiful trees which afforded a very fine prospect.

Americans when you pass by
You can't but cast an eye
To behold his house so neat
And his farm yet more complete
But alas his soul has fled
To the regions of the dead
There to rest in heaven above
Where he'll receive peace, joy, and love

Now I will give you a short history of Alexandria. It's a very fine city indeed. It is situated on the west side of the Potomac in sight of Washington City. It is laid out in exact squares and every building numbered. I think I shall be very contented here. The inhabitants are very compliant and obliging.

Oh dear mama although I am not I am at a great distance from you or not out of my mind, there is scarce an hour ______ but that I think of some of you. By this time you will think I am homesick but me is not that. I want to hear from you very much indeed for I feel impatient to hear how you all do when you receive this.

I wish you by no means to fail of writing me a letter. The sooner you write the better. Perhaps dear mama you will think it's strange because I go so far from home to seat myself but I have two reasons to give you. Firstly I thought I might be more healthy if I went a little way on the salt sea. Secondly, I saw no place that I could content myself to settle at the Nothards.

The people here are exceedingly rich. There is ten fortunes made here where there is one modest made to the Nothard. I was not very seasick. Monday we intend to open store. Our stand is in Union Street a very good stand indeed. We shall not expect to do much business at first not until we get established in trade. No more at present give my respects to all inquiring friends. Remember me to all my brothers and sisters relations and acquaintances. I shall remain your ever dutiful and obedient son.

PS please do not fail writing. When you direct your letter direct to Alexandria in the District of Columbia 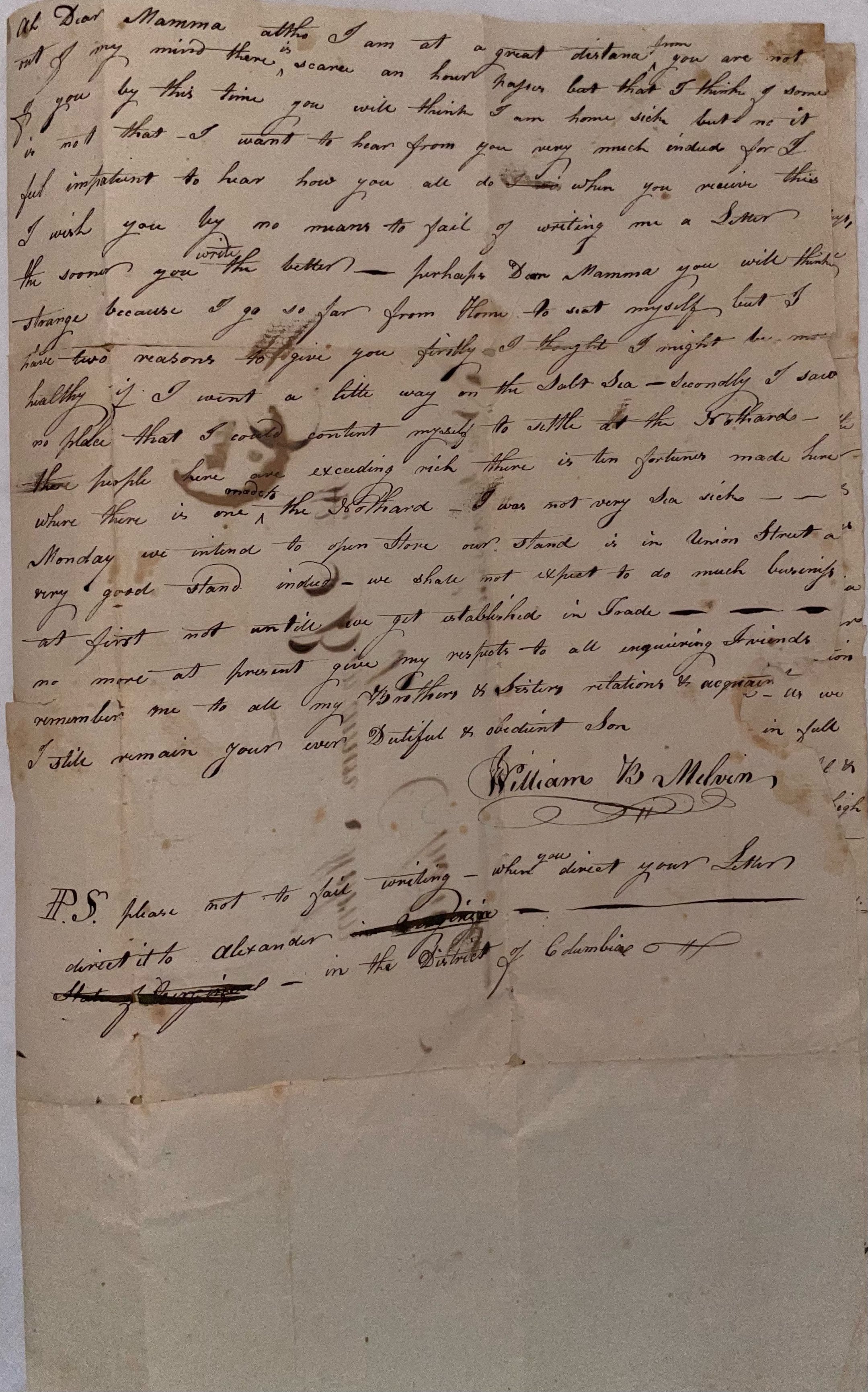 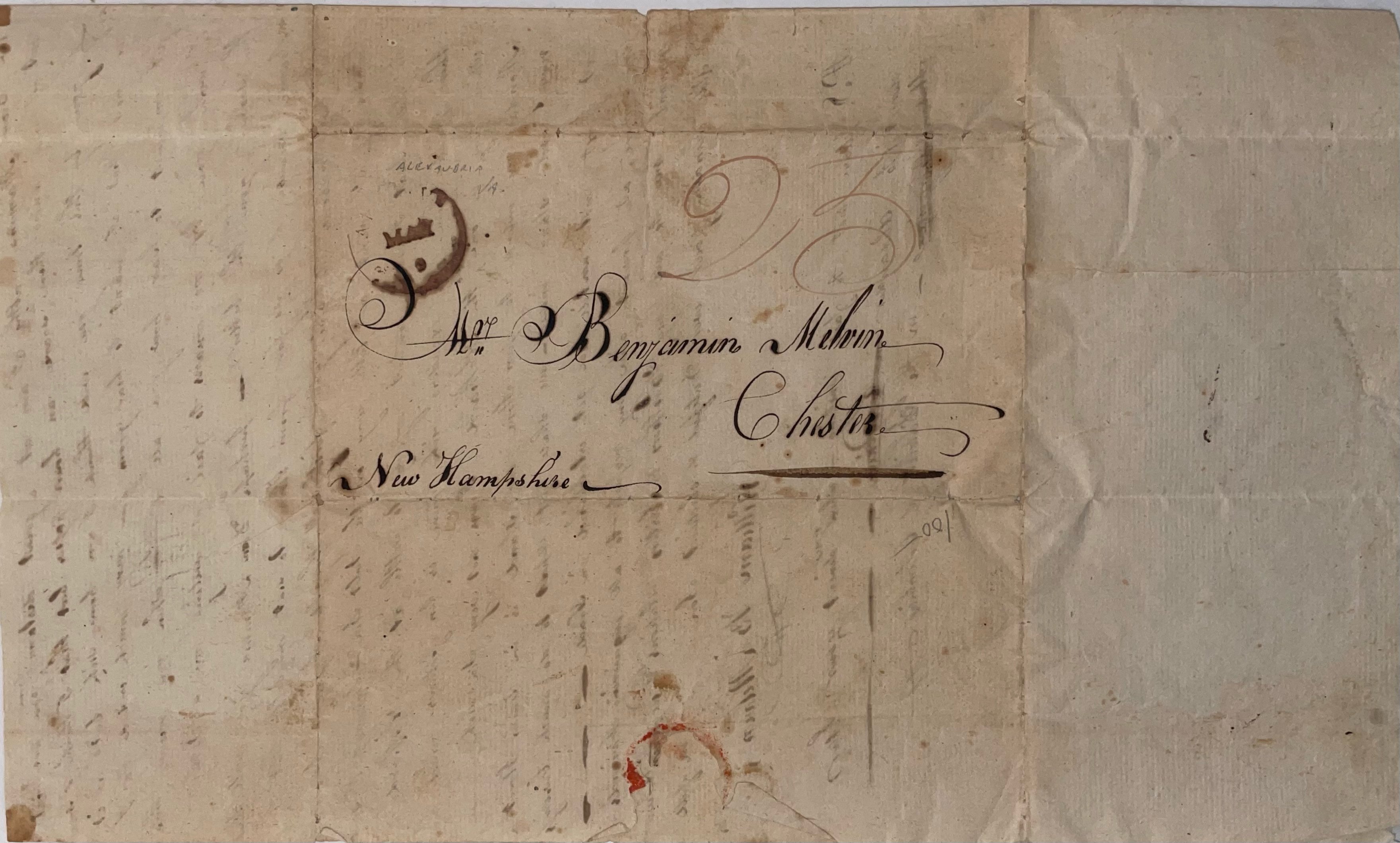